Joseph Scriven (1819-1886) lived a life of sorrows. His fiancé died the night before they were to be married. Engaged again, this fiancé also tragically perished. He wrote a poem that he sent to his mother, that was set to music and published, as What a Friend We Have in Jesus.

A memorial to him is found in his native Northern Ireland, as well as in his adopted hometown of Port Hope, Ontario. A marker reads:

Four miles north, in the family Pengelley Cemetery, lies the philanthropist and author of this great masterpiece, written at Port Hope, 1857. The composer of the music, Charles C. Converse, was a well-educated versatile and successful Christian, whose talents ranged from law to professional music. Under the pen name of Karl Reden, he wrote numerous scholarly articles on many subjects. Though he was an excellent musician and composer with many of his works performed by the leading American orchestras and choirs of his day, his life is best remembered for this simple music so well suited to Scriven’s text.

An obelisk was built on his grave, This monument was erected to the memory of Joseph Scriven, B.A., by lovers of his hymn, which is engraved hereon, and is his best memorial. Born at Seapatrick, Co. Down, Ireland, 10 Sept.1819, emigrated to Canada 1844. Entered into rest at Bewdley, Rice Lake, 10 August 1886, and buried here. Blessed are the pure in heart for they shall see God.

Author of the hymn, What a Friend We Have in Jesus

Joseph Scriven was born in 1819 of prosperous parents in Banbridge, County Down, Ireland. He graduated with a degree from Trinity College, Dublin in 1842. His fiancée accidentally drowned in 1843, the night before they were to be married.[2] In 1845, at the age of 25, left his native country and migrated to Canada, settling in Woodstock, Ontario. His reasons for leaving his country seem to be two-fold: the religious influence of the Plymouth Brethren upon his life estranging him from his family. He only remained in Canada briefly after becoming ill, but returned in 1847.

In 1855, while staying with James Sackville in Bewdley, Ontario, north of Port Hope, he received news from Ireland of his mother being terribly ill. He wrote a poem to comfort his mother called “Pray Without Ceasing”. It was later set to music and renamed by Charles Crozat Converse, becoming the hymn “What a Friend We Have in Jesus“.[1][3] Scriven did not have any intentions nor dream that his poem would be for publication in the newspaper and later becoming a favorite hymn among the millions of Christians around the world.[4]

About 1857 he moved near to Port Hope, Ontario where he again fell in love and was due to be married, but in August 1860 his fiancée suddenly fell ill of pneumonia and died.

He then devoted the rest of his life to tutoring, preaching and helping others.

In 1869 Scriven published a collection of 115 Hymns and other verses which did not include “What a friend”.[5]

Scriven drowned in 1886 at age 66. It isn’t known if his death was an accident or a suicide, as he was in a serious depression at the time. A friend reported, “We left him about midnight. I withdrew to an adjoining room, not to sleep, but to watch and wait. You may imagine my surprise and dismay when on visiting the room I found it empty. All search failed to find a trace of the missing man, until a little after noon the body was discovered in the water nearby, lifeless and cold in death.”[6] He was buried next to his second fiancée in Bewdley. 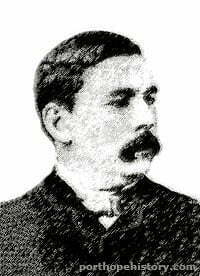