From the Wheaton Vault

Tsingtao (today called Qingdao), a city on the east coast of China, was Betty Stam’s childhood home; she (the oldest of five children) grew up there, where Betty’s father, Charles Scott, was a missionary.[3] In 1926, Betty returned to the United States to attend college. While a student at Moody Bible Institute in Chicago she met John Stam, who was also a student at Moody. Betty returned to China in 1931. When John arrived in Shanghai in 1932, they unexpectedly met again. They married in 1933.[4]

In November 1934, John and Betty moved to their mission station at Tsingteh[5] (now Jingde) (not to be confused with Tsingtao) in Anhui Province, with their three-month-old daughter, Helen.[6][7] On December 6, a messenger from the town’s magistrate came to the Stams at 8 o’clock in the morning and warned them that the Communists were approaching the city. At 9:30, they received a message that the Communists were within 4 miles (6 km) of the city.[8](p67) After John confirmed this, the Stams prepared to leave. However, the Communists quickly overran the city, came to where the Stams were staying and broke open the gates to the compound. They demanded all the money the Stams had and it was handed over. The Communists then arrested John and took him to the city prison. They left Betty, baby Helen, the maid and the cook in the Stams’ house. The soldiers later came back and took Betty and Helen.[8](p67) The maid and cook begged to go along, but they were threatened they would be shot if they did. Betty and Helen were taken to be with John in the prison. It was still the morning of December 6. That night, John Stam wrote a letter to CIM authorities, but it was never delivered. The letter was found later bundled up in some of Helen’s clothes. It stated that the Stams were being held by the Communists for a ransom of $20,000.[8](p68) John Stam also wrote to the mission authorities of how he and his wife had been captured, then wrote, “Philippians 1:20: ‘May Christ be glorified whether by life or death.'”

John, Betty and Helen were then taken to the local prison where some of the prisoners were released to make room for the Stams. In the midst of hustle and bustle, Helen started crying, and a soldier suggested that they kill her, since she was only bothering them. Then one of the prisoners who had just been released asked why they should kill the innocent baby. The soldiers turned to him and asked if he was willing to die for the foreign baby. The man was hacked to pieces in front of the Stams. Helen was allowed to live.[8](p69)[3]

The next morning, the Stams were forced to march 12 miles (19 km) west with the soldiers, to the town of Miaoshou[9] (which is just under 9 miles (14 km) due west of Jingde). The group stopped for a night, and Betty was allowed to tend to Helen, but in fact, she hid her daughter in the room inside a sleeping bag. The very next morning, John and Betty were being marched down the streets of Miaoshou to meet their deaths. Curious onlookers lined both sides of the streets. A Chinese shopkeeper stepped out of the crowd and talked to the Communists, trying to persuade them not to kill the Stams. The soldiers ordered the man back into the crowd, but he wouldn’t step back. The soldiers then invaded his house where they found a Chinese copy of the Bible and a hymnbook. He was led alongside the Stams to be executed for being a Christian.[8](p72) After marching for a short while longer, John Stam was ordered to kneel, and was beheaded. His wife and the shopkeeper were killed moments later.[10]

The baby, Helen, was found two days later by a Chinese pastor who took her home and took care of her. The Reverend Lo Ke-chou and his wife then took the baby girl to her maternal grandparents, the Reverend Charles Ernest Scott and his wife, Clara, who were also missionaries in China.[11] The Stams’ daughter later came to the United States and was raised by her aunt and uncle, George and Helen Mahy. As for Helen’s parents, a small group of Christians found their bodies and buried them on a hillside. The Stams’ gravestones read:

John Cornelius Stam, January 18, 1907, “That Christ may be glorified whether by life or by death.” Philippians 1:20

The story of their martyrdom was much publicized and inspired many to become missionaries.[12]

This cemetery was situated above the Methodist Mission Hospital grounds and below the Boys Academy on the hill named Iche san.

During WWII, the Japanese troops excavated the bodies of the dead and threw them in the river. The Cemetery was then used as a vegetable garden for their troops. It is unknown what happened to the grave markers they removed. 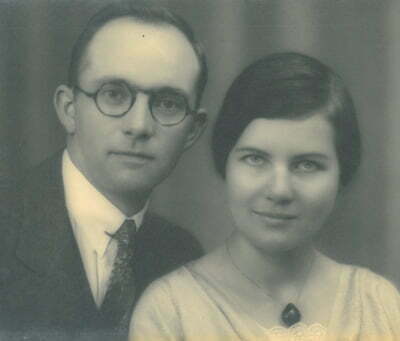