Carl Becker (1894-1990) was born and raised in Manheim, Pennsylvania. After receiving his medical training at Hahnemann Medical College in Philadelphia, he successfully practiced medicine in Boyertown, Pennsylvania, for seven years. In 1929 Becker and his wife, Marie, left Boyertown to go to the Belgian Congo (modern Democratic Republic of the Congo) under the Africa Inland Mission. In doing so, Becker exchanged an annual income of $10,000-plus for a missionary’s salary of $720 per year.

Five years later Becker moved with his wife and two children to the tiny mission station of Oicha in the dense Ituri forest to work among the Pygmies and other jungle tribes. In that unlikely spot, among towering mahogany trees, Becker and his associates built a highly effective medical compound. With no long-range plan and no budget for expansion, rooms and buildings were added as they became necessary, and were often paid for out of Becker’s personal salary of just sixty dollars a month.

Becker’s weekends were devoted to itinerant evangelistic ministry in the surrounding villages. Mass evangelism was carried out to the hundreds of Africans who came to Oicha each day for medical treatment. Young Christian patients being treated at the hospital were also helped to grow in their faith.

Medical ministry brought about the fruitful evangelization of two area people groups which had long been intensely discriminated against, Pygmies and lepers. As a result of the care and love they received from Becker and his Christian staff, thousands of them were drawn to faith in Christ.

With Becker being the only resident medical doctor at Oicha, an astounding total of more than 3,000 operations were performed each year and some 500 babies were delivered annually. While treating all variety of injuries and diseases, Becker did extensive research and specialized in the treatment of leprosy. By the early 1950s he was treating some 4,000 resident patients at his 1,100-acre leprosy village. The results were so impressive that medical missionaries and leprologists from all over the world visited Oicha to learn from Becker.

An interesting encounter relates that a visiting mission leader, while walking down the path with Dr. Becker, saw one of the African nurses approach them.  The visitor said “I think I recognize that fellow.  He had a bad reputation up north—insolent, surly.  You couldn’t trust him out of your sight.”  Dr. Becker responded, “Maybe so, but he’s one of our most trusted staff members now.”  The nurse was called over and was asked by the visitor, “Why has your life changed since coming to Oicha?”  The African looked at Dr. Becker and then to the visitor and replied, “Many missionaries have preached Jesus Christ to me, and many missionaries have taught Jesus Christ to me, but in the doctor, I have seen Jesus Christ.”  This seems to epitomize the life of Dr. Becker. 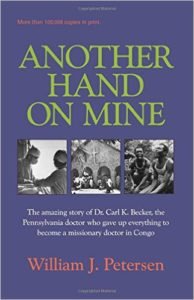