Saint Paul is also known as the Apostle of the Nations because of his missionary journeys throughout the eastern Mediterranean (46-58 AD) for the dissemination of Christianity. In this context he visited several Greek cities, including Samothrace, Philippi, Thessalonica, Berea, Athens, and, most importantly, Corinth. Corinth, a Roman imperial colony and capital of the province of Achaea (Peloponnese and Central Greece), experienced a period of great prosperity during the Roman era.

Saint Paul arrived in the city in the mid-1st century A.D. and took up lodging and work with the Jewish tentmakers Aquila and Priscilla. At the same time, he reasoned and preached the Gospel to the Jews of the city, being confronted, however, with strong opposition from several members of the city’s large Jewish community. Saint Paul thus resolved to devote his full attention to the conversion of the Gentiles, a decision which proved highly successful. After a year and a half of his sojourn in Corinth, Saint Paul left for Ephesus, having established a strong and well-organized church in the city.

Even after his departure, he kept in contact with the community; in fact, he addressed some of his most famous epistles, the “epistles to the Corinthians”, to its leaders. Saint Paul and the Bema of the Roman Forum During Paul’s stay in Corinth, he was brought for judgment before the proconsul Gallio on the accusation of conducting illegal teachings. Gallio, however, refused to judge what he considered to be a mere religious dispute among the Jews.

According to tradition, the site of Paul’s trial was the Bema, a large elevated rostrum standing prominently in the centre of the Roman forum of ancient Corinth and from where the city’s officials addressed the public. Probably because of the monument’s connection to Saint Paul, the Bema was transformed into a Christian church during the Byzantine period. Today, the monument constitutes the historical seat of the Metropolis of Corinth and the location where a Great Vesper is conducted on the feast of Saint Paul (29th June). 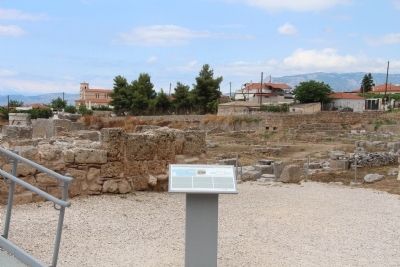