Initially Carmichael traveled to Japan for fifteen months, but fell ill and returned home.[3] After a brief period of service in Ceylon (Sri Lanka), she went to Bangalore, India for her health and found her lifelong vocation. She was commissioned by the Church of England Zenana Mission. Carmichael’s most notable work was with girls and young women, some of whom were saved from customs that amounted to forced prostitution. Hindu temple children were primarily young girls dedicated to the gods, then usually forced into prostitution to earn money for the priests (i.e., Devadasi)[4] Families often sold their children to the temples if they did not want them, or if they needed extra money and fewer children to feed.[citation needed]

Carmichael founded the Dohnavur Fellowship[5] in 1901 to continue her work,[6] as she later wrote in The Gold Cord (1932). A popular early work was Things as They Are: Mission Work in Southern India (1903). Dohnavur is situated in Tamil Nadu, thirty miles from India’s southern tip. The name derives from Count Dohna, who initially funded German missionaries at the site in the early 19th century, on which Rev. Thomas Walker then established a school. Carmichael’s fellowship transformed Dohnavur into a sanctuary for over one thousand children who would otherwise have faced a bleak future.[7] Carmichael often said that her Ministry of rescuing temple children started with a girl named Preena. Having become a temple servant against her wishes, Preena managed to escape. Amy Carmichael provided her shelter and withstood the threats of those who insisted that the girl be returned either to the temple directly to continue her sexual assignments, or to her family for more indirect return to the temple. The number of such incidents soon grew, thus beginning Amy Carmichael’s new Ministry.[8] When the children were asked what drew them to Amy, they most often replied “It was love. Amma (They’re referring to Amy as their mother; Amma means mother) loved us.”[9]

Respecting Indian culture, members of the organization wore Indian dress and gave the rescued children Indian names. Carmichael herself dressed in Indian clothes, dyed her skin with dark coffee, and often travelled long distances on India’s hot, dusty roads to save just one child from suffering.

While serving in India, Amy received a letter from a young lady who was considering life as a missionary. She asked Amy, “What is missionary life like?” Amy wrote back saying simply, “Missionary life is simply a chance to die.” Nonetheless, in 1912 Queen Mary recognized the missionary’s work, and helped fund a hospital at Dohnavur.[10] By 1913, the Dohnavur Fellowship was serving 130 girls. In 1918, Dohnavur added a home for young boys, many born to the former temple prostitutes. Meanwhile, in 1916 Carmichael formed a Protestant religious order called Sisters of the Common Life. 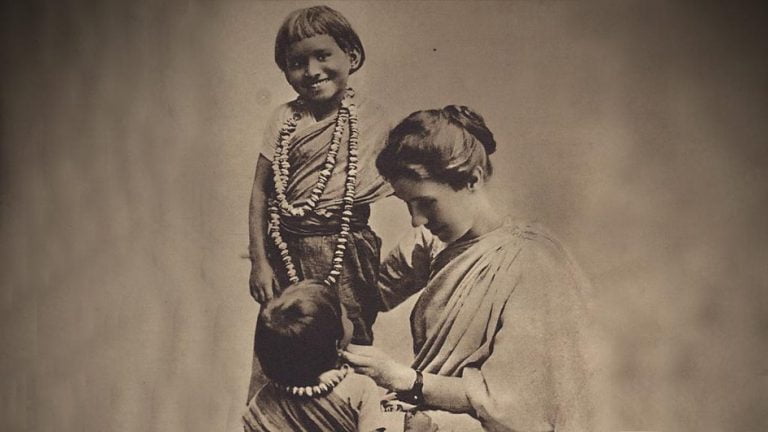