About 600 years later, Amaziah, son of Joash was King in Jerusalem. Amaziah picked a fight with Jehoash, king of Israel, and was crushed (2 Kings 14:12). Jehoash came to Jerusalem, broke down 600 feet of the Jerusalem wall, and made off with all the gold and silver in the temple, the king’s house, and even took hostages (2 Kings 14:14). Jehoash knew enough than to occupy Jerusalem (don’t spread your supply lines too far), so he returned to Samaria (then-capitol of the Northern Kingdom) and didn’t occupy Jerusalem. So Amaziah regained control of Jerusalem, but he wasn’t exactly a war hero. And if that wasn’t enough – there was a palace intrigue – and he had to flee Jerusalem, to his other fortress 35 miles away in Lachish (2 Kings 14:19) where presumably he was more popular (after all he lost Jerusalem, but he didn’t lose Lachish). But it didn’t matter, they killed him in Lachish, and made his teenage son king instead.

65 years after Amaziah was slain in Lachish, Lachish was back in the news. Hezekiah was king of Judah, but all was not well in Lachish. Sennacherib king of Assyria was laying siege to Lachish (2 Kings 18:14), and Hezekiah tried to bribe him with all the silver and gold that they had redecorated the temple with, but that wasn’t enough. Sennacherib sent from his war camp outside Lachish some messengers to talk to Hezekiah, including Rabshakeh. After he wiped out Lachish, the army went to Jerusalem (Isaiah 36:2). This was the same army of 185,000 that the angel of the Lord would strike dead (Isaiah 37:36).

2,500 years later, a 28 year old archaeologist (who would go on to become Under-Secretary of State of the British Empire under Queen Victoria) was digging in Sennacherib’s palace and found a 40 foot wide and 16 foot long carving of the battle for Lachish. He brought it back to London, and you can see it today in the British Museum. While the Museum is closed, you can virtually tour the British Museum and see the battle of Lachish right now (and you might even see some primitive tanks!) 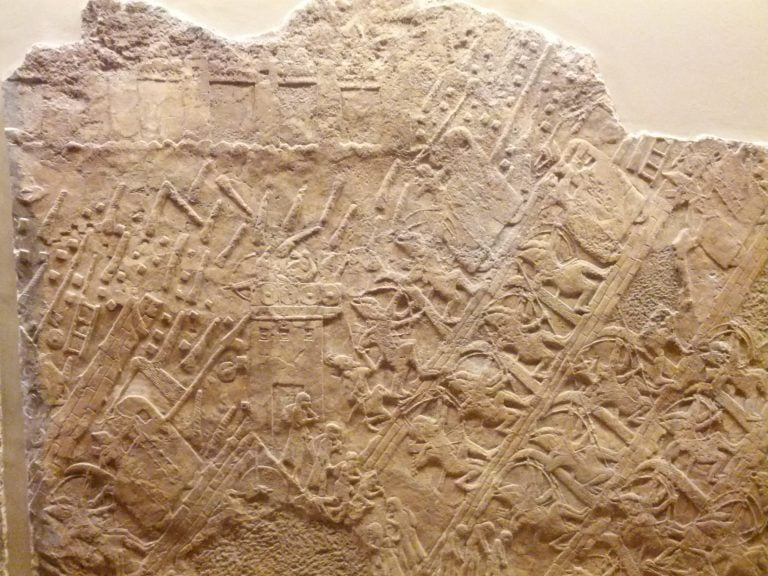