How it was lost
The Baptism Site was a major Pilgrim Station from the days of John the Baptist. Even after he died, many of his students stayed in the area which was the birthplace of Christianity. Churches were built near the site, monks lived in caves, and pilgrims visited the site.
This tradition continued until around the 14th Century. With the power of the Crusaders vanquished, and Byzantine weakening, the site was neglected and the area returned under the control of local tribes. East of the Jordan was no longer a safe place to go, and with no guarantee of safety, pilgrimage to the site became less and less frequent, and then virtually stopped.

The Madaba Map Discovery
A scholar from Jerusalem discovered the Madaba Map [in Madaba present day Jordan], in 1897. This map was a 6th century Mosaic depicting a map of the Middle East in the 6th Century. The discovery and subsequent analysis of the map led to a renewed interest about the exact location of the Baptism Site. Pilgrims started to return to the area east of the River Jordan hoping to find clues to the location of the site.

20th Century
A local Bedouin, Shaykh Salih Yacoub recalls Christian pilgrims visiting the area in the 1920s (while the area was under Ottoman rule) and building a church.
World War I, the fall of the Ottoman Empire, World War II, and then the Palestinian-Israeli Conflict with wars in 1948, 1967 and 1973 made the Baptism Site a no-go area for most of the century.

1994 Peace Treaty
The Baptism Site was a militarized zone, full of mines when Jordan and Israel signed their peace treaty in 1994. The treaty allowed for the de-mining of the area.

A Chance Meeting “The Prince and the Monk”
While on a personal trip to Mount Nebo, HRH Prince Ghazi bin Muhammad met the archaeologist and monk Father Piccirillo, Father Piccirillo explained to HRH Prince Ghazi about the significance of the Baptism Site, and the possibility of looking for it now that the peace treaty had been signed. HRH Prince Ghazi arranged with the military for them to visit the site. On their visit, they found mosaic patterns and ruins of a church. It was enough for HRH Prince Ghazi to order further investigation. Soon after, an archaeological team was given access to the site, and following information gained from the local Bedouin tribes, many more archeological remains started being discovered: Pottery, mosaics, caves, and marble. Most of these were on a small hill known by the locals as ‘Elijah’s Hill’. When further digging was conducted here, the remains of three large pools of Roman period were found. A vast water system was found, and then the remains of a large monastery which was identified as a 5th century monastery built by a monk called Rhotorius.

Finding Churches built in the memory of the baptism of Jesus
On one site near the river Jordan, mosaic remains were found; then marble remains; then more remains. In total, the remains of five different churches, built at separate times, were found. Why were churches built on this spot in particular on five different occasions? Were these churches described in old documents? These questions among others needed a clear answer.

The Bible clearly identifies the place where John the forerunner started his ministry. It is Bethany beyond Jordan. John came in the spirit and strength of Elijah, who ascended to Heaven east of the Jordan opposite Jericho. Jesus came to the place where John was baptising and was baptized by John. So, were these churches built at this particular location to mark this important event?

Pilgrims’ Accounts
Old pilgrims’ accounts show how closely their descriptions matched with what was discovered:

Theodosius (A.D 530) wrote “5 miles north of the Dead Sea ‘In the place where the Lord was baptized there is a single pillar and on the pillar an iron cross has been fastened, there too is the church of St. John the Baptist, which the Emperor Anastasius built: this church is very lofty, being built above large chambers, on account of the Jordan when it overflows.’” The remains of the piers over which the church was built was discovered.

Forty years later (AD 570) Antoninus of Piacenze added: “By the side of the Jordan, where the Lord was baptized, at the place where the water returned to its bed, marble steps descend into the water.” Remains of the marble steps were found too.

100 years later Arculfus of France (AD 670) gave important notes, saying: “At the edge of the river is a small square church, built, as is said, on the spot where the garments of the Lord were taken care of at the time when He was baptized. This is raised, so as to be uninhabitable, on four stone vaults, standing above the waters which flow below.” We can see the two northern piers while only the foundations of the southern piers where discovered recently. Hence, in plan we have a huge cruciform baptismal pool, where pilgrims would descend through the marble steps and be baptized. In fact this is the only cruciform baptismal font on earth that used the river Jordan water for baptism.

Other important remains were also found at the site, we can now identify two basilicas, partly built on the remains of John the Baptist Church and uniquely designed being linked through marble steps to the east linking them with the monumental cruciform baptistery that used running water for baptism. Over which the mantle church was built.

Epiphanius (AD 750-800) mentioned a huge church (the church of the trinity) being built at the bank of the river, a mile west of John the Baptist monastery (Elijah’s Hill) where he stayed overnight.

After the destruction of the 4 churches mentioned above, a chapel was built on the remains of the northwestern pier. Abbot Daniel (AD 1106-1107) wrote “The place where Christ was baptized is distant from the river Jordan as far as a man can throw a small stone. There is a little chapel with an altar. This marks the place where John the Forerunner baptized our Lord Jesus Christ.”

The succession of uniquely designed churches at the edge of the river then, is testimony to the forces of nature and to the determination of the believers to build unique memorials at the spot they believed Jesus was baptized. To our excitement, our questions were answered and the rediscovery was complete.

Photo by Randy Melchert of Jimmy DeYoung at baptismal site 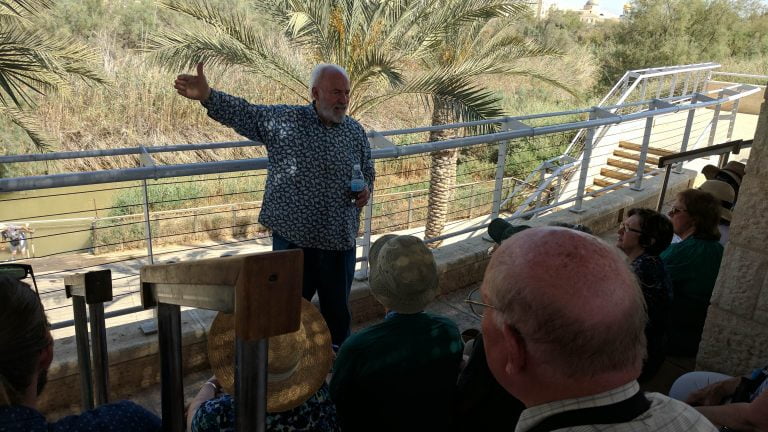