Alexander was born at 25 Eccles Street, Dublin, the third child and second daughter of Major John Humphreys of Norfolk (land-agent to 4th Earl of Wicklow and later to the second Marquess of Abercorn), and Elizabeth (née Reed).[2] She began writing verse in her childhood, being strongly influenced by Dr Walter Hook, Dean of Chichester. Her subsequent religious work was strongly influenced by her contacts with the Oxford Movement, and in particular with John Keble, who edited Hymns for Little Children, one of her anthologies. By the 1840s she was already known as a hymn writer and her compositions were soon included in Church of Ireland hymnbooks. She also contributed lyric poems, narrative poems, and translations of French poetry to Dublin University Magazine under various pseudonyms.[3][a]

Her book Hymns for Little Children reached its 69th edition before the close of the nineteenth century. Some of her hymns, e.g. “All Things Bright and Beautiful“, “There Is a Green Hill Far Away” [b] and the Christmas carol “Once in Royal David’s City“, are known by Christians the world over, as is her rendering of “Saint Patrick’s Breastplate“.[4] She issued Verses for Holy Seasons (1846), The Lord of the Forest and His Vassals (1847) – a children’s allegory – and Hymns for Little Children (1848).

In Strabane in October 1850 she married the Anglican clergyman William Alexander, afterwards Bishop of Derry and Archbishop of Armagh. Her husband also wrote several books of poetry, of which the best known is St. Augustine’s Holiday and other Poems. She was six years older than the clergyman, causing great family concern.[3]

1 Jesus calls us o’er the tumult
of our life’s wild, restless sea;
day by day his sweet voice soundeth,
saying, “Christian, follow me.”

2 As, of old, apostles heard it
by the Galilean lake,
turned from home and toil and kindred,
leaving all for his dear sake.

3 Jesus calls us from the worship
of the vain world’s golden store,
from each idol that would keep us,
saying, “Christian, love me more.”

4 In our joys and in our sorrows,
days of toil and hours of ease,
still he calls, in cares and pleasures,
“Christian, love me more than these.”

5 Jesus calls us: by thy mercies,
Savior, may we hear thy call,
give our hearts to thine obedience,
serve and love thee best of all. 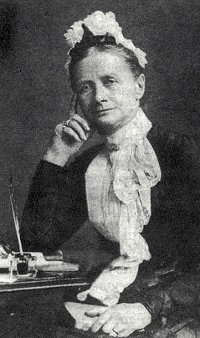