He was 19 and was caught reading a Bible. That led to an argument where he rejected the doctrine of trnasubstantiation, and was burned at the stake.

“William Hunter, Martyr. Committed to the Flames March 26th MDLV. Christian Reader, learn from his example to value the privilige of an Open Bible. And be careful to maintain it.”

At the spot where he was burned, an elm tree was planted. An 1847 sketch shows the prominent tree, referred to as the Martyrs Elm in front of Brentwood School. By 1906 a gnary stump was all that remained. The plaque on the new oak says:

“This Oak was planted to mark the accession of H.M. King George VI in 1936, and to replace the Ancient Elm near which William Hunter was burnt to death for his beliefs, March 26th, 1555. The decayed stump of the Old Tree was removed in 1952.”

Historian John Foxe recorded the life of this teenager in his work, Foxe’s Book of Martyrs. Foxe notes that he was the son of Christian parents, trained from a youth. William was offered forgiveness if he recanted but William refused. Before his execution he read from Psalm 51, “The sacrifices of God are a broken spirit; a broken and a contrite heart, O God, Thou wilt not despise.” He declared “Lord, Lord, Lord, receive my spirit” as he was burned for his faith. 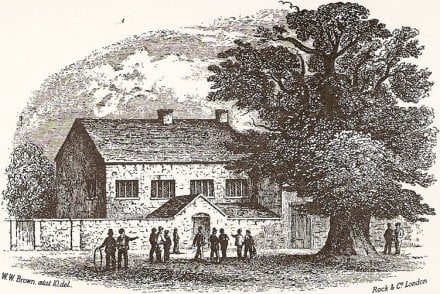