Baker was the son of Vice-admiral Sir Henry Loraine Baker, C.B., by his marriage with Louisa Anne, only daughter of William Williams, Esq., of Castle Hall, Dorset. His father served with distinction at Guadeloupe in 1815. His grandfather was Sir Robert Baker of Dunstable House, Surrey, and of Nicholashayne, Culmstock, Devon, on whom a baronetcy was conferred in 1796. Sir Henry Williams Baker was born in London on Sunday, 27 May 1821, at the house of his maternal grandfather; and after completing his university education at Trinity College, Cambridge, took his B.A. degree and holy orders in 1844, and proceeded M.A. in 1847. In 1851 he was presented to the vicarage of Monkland near Leominster. On the death of his father, on 2 November 1859, he succeeded him as third baronet.

He was the author of ‘Daily Prayers for the Use of those who have to work hard,’ as well as of a ‘Daily Text-book’ for the same class, and of some tracts on religious subjects. He died on Monday, 12 February 1877, aged 55, at the vicarage of Monkland, and was buried in the churchyard of the parish. His last words were from his hymn The King of Love My Shepherd Is: “Perverse and foolish oft I stayed / But yet in love He sought me / And on His shonlder gently laid / And home, rejoicing, brought me.”[1]

1 The King of love my shepherd is,
whose goodness faileth never.
I nothing lack if I am his,
and he is mine forever.

2 Where streams of living water flow,
my ransomed soul he leadeth;
and where the verdant pastures grow,
with food celestial feedeth.

3 Perverse and foolish, oft I strayed,
but yet in love he sought me;
and on his shoulder gently laid,
and home, rejoicing, brought me.

4 In death’s dark vale I fear no ill,
with thee, dear Lord, beside me;
thy rod and staff my comfort still,
thy cross before to guide me.

5 Thou spreadst a table in my sight;
thy unction grace bestoweth;
and oh, what transport of delight
from thy pure chalice floweth!

6 And so through all the length of days,
thy goodness faileth never;
Good Shepherd, may I sing thy praise
within thy house forever. 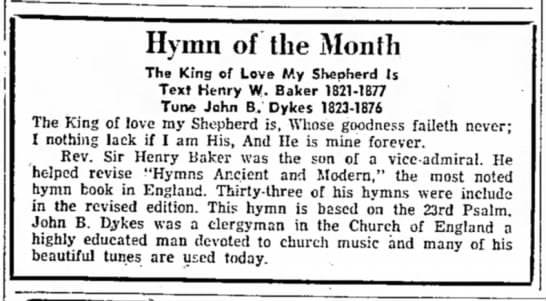