John Myles organized the earliest Baptist church in Wales, in 1651. During Oliver Cromwell’s rule, Myles’s church occupied the thirteenth-century Church of St. Illtyd, located on a small country lane, at Ilston, near the west end of the Swansea airfield. at the Restoration of the British monarchy, in 1660, officials of Charles II ousted John Myles and his congregation from St. Illtyd Church. Baptists fled the area, but strong tradition testifies that Myles and a remnant of his people worshipped secretly in a secluded building, now in ruins, a half mile from the Church of St. Illtyd. For the shortest walk to the site, begin at Gower Inn, in nearby Parkmill. Near the west end of the Inn’s parking lot is a wide iron gate, to the left of which is this bronze inscription:

The path beyond this gate leads to the Ilston Memorial erected in 1928. On the ruins of the meeting place of the Baptist Church founded by John Myles in 1649, the Memorial is built from the original stones.

The “Ilston Memorial” is a stone pulpit, standing among the ancient ruins of the Baptist chapel, formerly a Roman Catholic chapel. To reach the site, follow the path for a delightful quarter-mile walk into the Ilston Valley. At certain points along the way, you will see the stream, known by locals as the “Killy Willy,” running along near the path. Twisting and winding across the valley floor, the Killy Willy cuts across the path in several places, where small, wooden, foot bridges allow you to continue to the medieval chapel called “Trinity Well.” Underneath the chapel’s stone foundation is a spring to which superstitious Catholics once flocked for its promised healing powers. There is no record of when the chapel fell into disuse. The Memorial pulpit holds a carved, open Bible. Underneath the Bible is a plaque with this inscription:

To commemorate the foundation in this valley of the first Baptist Church in Wales 1649-60 and to honor the memory of its founder John Myles. This ruin is the site of the pre-Reformation chapel of Trinity Well and is claimed by tradition as a meeting place of the above Cromwellian Church. This memorial has been erected with the permission of Admiral A.W. Heneage Vivian, C.R.M.V.O. and was unveiled by the Rt. Hon. D. Lloyd George. M.P.O.M., 13th June 1928.

Photo  © Copyright Alan Hughes and licensed for reuse under this Creative Commons Licence. 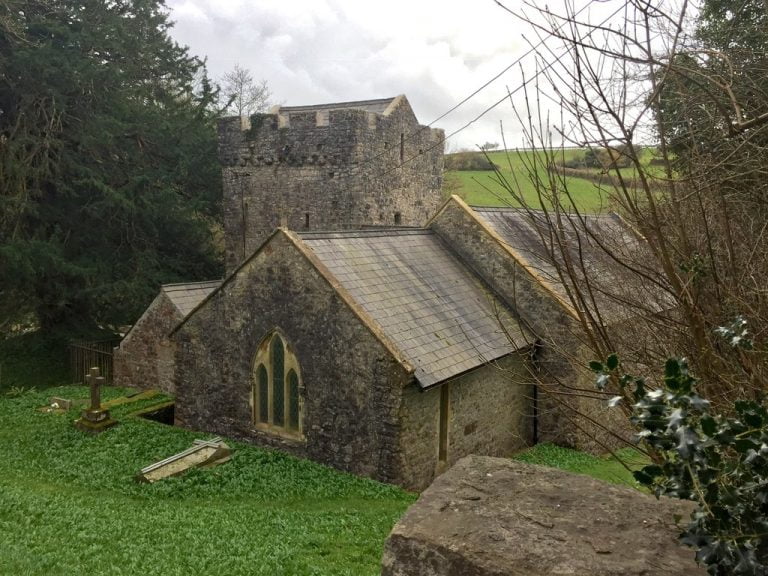