The focus of the Badè Museum of Biblical Archaeology is on the excavation of Biblical Mizpah (Tell en-Nasbeh) from 1926 to 1935 under the British Mandate.

Mizpah, named for the place where Jacob and Laban made a covenant after Jacob left Laban’s employment with his wives Rachel and Leah (Laban’s daughters) according to Genesis 31:49.

It was made into a city by the Judaean king Asa, who later took the stones of Ramah that the Israelite king Baasha built (1 Kings 15:21-22) and Asa built the city of Mizpeh.

Mizpeh appears to be a significant city throughout the Divided Kingdom (930-586 BC). Later, after the fall of the Southern Kingdom of Judah under Zedekiah, when Nebuchadnezzar captured Jerusalem, he left Gedaliah as governor (2 Kings 25:21-26) over the people who remained. Gedaliah moved his seat of government to Mizpah, and offered peace to the royal prince Ishmael ben-Nathaniah. Ishmael took ten men with him, and killed Gedaliah and his Jewish and Chaldean supporters. After this, the remaining Jewish leaders were afraid of Nebuchadnezzar returning, so they left for Egypt.

The collections of the Badè Museum of Biblical Archaeology span a period of some 3,000 years and include a phenomenal array of everyday artifacts such as cooking pots, grinding stones, lamps, and agricultural implements from ancient Palestine along with colorful Greek and Cypriot ceramics, scarabs from Egypt, and cuneiform tablets from ancient Mesopotamia. The Badè Museum continues the work of William Badè and the former Badè Institute of Biblical Archaeology by engaging in on-going research with the permanent Tell en-Nasbeh collection. Much ongoing research of specific artifacts and object types from the collection is done by museum staff and visiting scholars.

The Badè Museum gallery is open to the public on Mondays 10:00am – 2:00pm during the academic year and by appointment. Information about admission and directions can be found here and information regarding scheduling and booking tours, group, and school visits can be found here.

The Badè Museum of Biblical Archaeology has been an integral part of Pacific School of Religion since the time the Museum was conceived. The core of the Museum collection consists of materials from the site of Tell en-Nasbeh, excavated under the direction of William F. Badè. Dr. Badè’s work at Tell en-Nasbeh represents one of the earliest scientific excavations in Palestine. 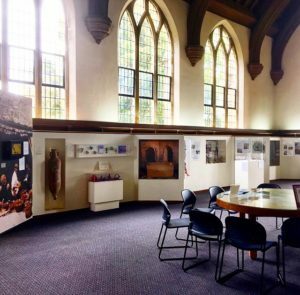