Samuel Porter Jones (1847-1906) was born in Oak Bowery, Alabama, before moving to Cartersville, Georgia at age 9 when his mother died.

Following the Civil War, his father, a lawyer, encouraged his son into the family business. In 1868 he was admitted to the bar, but struggled, sinking into depression and drunkenness.

In August, 1872, his father was dying, and Sam turned from his sin to the Savior. He joined the Methodist church as a circuit riding preacher until 1881 when he travelled the state raising money for the North Georgia Orphans Home (140 years earlier, George Whitfield was raising money for the Savannah Orphanage).

In 1884, he began leading tent revivals.

In 1885, he met Edwin Othello Excel. Excel was a Northerner who contributed to more than 2,000 songs, and is the author of Since I Have Been Redeemed. Excel would travel with Jones for the next twenty years, and later work with Gipsy Smith.

In 1885, freelance reporter for the Atlanta Constitution, Samuel W. Small covered the revival meeting in Cartersville. The only way he could deal with the overwhelming conviction of sin was to drink! But four days later, he “pleaded with Christ that he would let me cling to his cross, lay down all my burdens and sins there, and be rescued and saved by his compassion.” Small then spread the word of a “press conference” on the steps of City Hall for a major announcement. The announcement was his testimony – conversion from sin, forsaking of liquor, and dedication to the ministry. When Small was 76, a 39 year old evangelist named Bob Jones asked him to compose a doctrinal statement for the college. For almost the next one hundred years, that statement would be verbally attested to by thousands of students every morning at Bob Jones University.

Also in 1885, a heckler came to his meetings. Thomas Ryman (1843-1904) was 42, a Nashville steamboat line owner. He had just moved into a new house, and thought little of this Christian evangelist. But the preaching turned his life around, and he talked to Jones about building a tabernacle for the revival. Seven years and $100,000 later (almost $3,000,000 today), the Union Gospel Tabernacle opened in Nashville on May 25, 1890. After Ryman’s death in 1904, and his funeral in the Tabernacle, the building was renamed the Ryman Auditorium. Featuring Presidents Roosevelt and Taft, and entertainers Will Rogers and John Philip Sousa, it became a cultural center. In 1943, the Grand Ole Opry moved to the Ryman Auditorium.

In 1886, he built “The Tabernacle”  where he also held services in September for the rest of his life. Specially chartered trains would bring thousands to Cartersville, where the throngs would parade singing hymns from the train station to the Tabernacle.

He would preach to an estimated three million people throughout the South, the North, and Canada. His most famous sermon was, “Quit Your Meanness.”

Returning from a revival, he died just short of turning 59. He is the only non-politician to lie in state in Atlanta at the State Capitol. He was buried at Oak Hill Cemetery in Cartersville.

In 1913, the local clergy were offended at the possibility of the Bob Jones becoming the resident evangelist and successfully prevented his coming to town. But by 1940, the Tabernacle was no more.

“Quit your meanness, and tell God you mean it, if you wish to be saved. You need not be skipping around the Lord with the devil’s old musket on your shoulder.”  Sam Jones

For 20 years, thousands came annually to this site, attracted by the magnetic personality and forceful eloquence of Sam Jones, renowned Evangelist and Christian crusader.

Here he built, in 1886, at his own expense, a large open-air structure, called “The Tabernacle,” for the inter-faith meetings begun in 1884.

Until his death in 1906, he held services here each September, bringing to his hometown the co-workers who assisted him in the great revivals he held throughout the country. 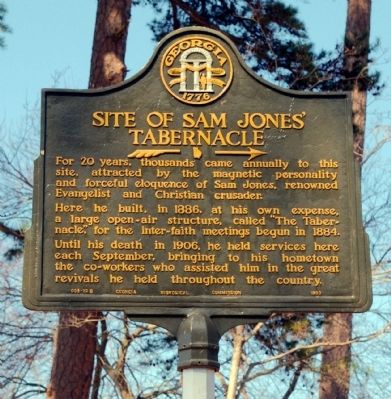