John Wesley (1703-1791) was an Oxford graduate, an Anglican priest, and led the “Holy Club” where they prayed for three hours a day to try to be a better Christian. He even became a missionary to the Native Americans in Georgia.

On October 14, 1735, John and his brother Charles Wesley departed England for Savannah aboard the Simmonds.

On February 6, 1736 he landed on what is now Cockspur Island. Wesley records,

“About eight in the morning, we first set foot on American ground. It was a small uninhabited island, over against Tybee. Mr. Oglethorpe [founder of Georgia] led us to a rising ground where we all kneeled down to give thanks. He then took boat for Savannah. When the rest of the people were come on shore, we called our little flock together to prayers.”

On Saturday, February 7th, he would have an interesting conversation with a Moravian pastor:

Mr. Oglethorpe returned from Savannah with Mr. Spangenberg, one of the pastors of the Germans. I soon found what spirit he was of and asked his advice with regard to my own conduct.

He said, “My brother, I must first ask you one or two questions. Have you the witness within yourself? Does the Spirit of God bear witness with your spirit that you are a child of God?”

I was surprised, and knew not what to answer.

He observed it and asked, “Do you know Jesus Christ?”

I paused and said, “I know He is the Saviour of the world.”

I answered, “I hope He has died to save me.”

He only added, “Do you know yourself?”

On February 14th, some native Americans came to him. Tomo Chachi said,

“I am glad you are come. When I was in England, I desired that some would speak the great Word to me and my nation then desired to hear it; but now we are all in confusion. Yet I am glad you are come. I will go up and speak to the wise men of our nation; and I hope they will hear. But we would not be made Christians as the Spaniards make Christians: we would be taught, before we are baptized.“

On February 6, 1736, John Wesley, the founder of Methodism, landed at Peeper (now Cockspur) Island near here and there preached to his fellow voyagers his first sermon on American soil. A monument has been erected on Cockspur Island to commemorate the event.

Sent to Georgia by the Trustees as missionary, Wesley was the third minister of the Established Church in the colony. He preached in the scattered settlements of Georgia, journeying thither by boat and over Indian trails. Wesley returned to England in 1737 after differences with his parishioners. “I shook off the dust of my feet and left Georgia,” he wrote, “having preached the Gospel there (not as I ought, but as I was able) one year and nearly nine months.” 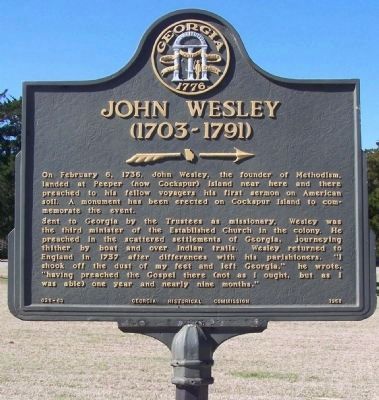