Old Kiokee Baptist Church, founded by Daniel Marshall, is the earliest continuing Baptist church in Georgia. They erected their third (present) meetinghouse, in 1808, with its quaint auditorium, gallery, and hand-hewn pews. The congregation uses this building, at 2520 Ray Owens Road, for special services. For access, contact the church (706-541-1086). Inquire about the Marshall home-site and cemetery.

Kiokee Church, the first Baptist Church to be constituted in Georgia, was organized in the Spring of 1772, by the Rev. Daniel Marshall, one of the founders of the Baptist denomination in Georgia. A meeting house was built, and the Rev. Daniel Marshall became the first pastor, ministering from his headquarters at Kiokee to an ever increasing number of Baptists in the area.
In October, 1784, the preliminary meeting for the organization of a Georgia Baptist Association was held at Kiokee Church. The Rev. Daniel Marshall died November 2, 1784, and some time later the church was moved to Appling and a new brick edifice erected.
Kiokee Baptist Church was incorporated December 23, 1789, as “The Anabaptist Church on Kiokee”, with Abram Marshall, William Willingham, Edmund Cartledge, John Landers, James Simms, Joseph Ray and Lewis Gardner as Trustees. 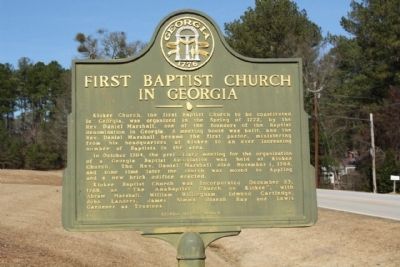 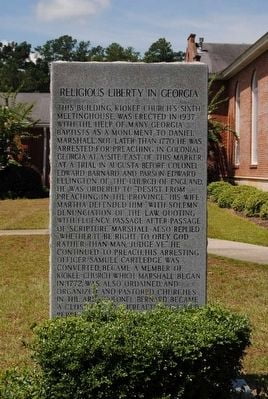 0 feet
No Reviews
Favorite
From the marker: This building, Kiowee Church’s sixth meeting house, was erected in 1937 with the help of many Georgia Baptists as a monument to Daniel Marshall. Not later than 1770, he was arrested for preaching in Colonial Georgia at a site east of this marker. At a trial in Augusta before Colonel Edward Barnard and Parson Edward Ellington of Read more... 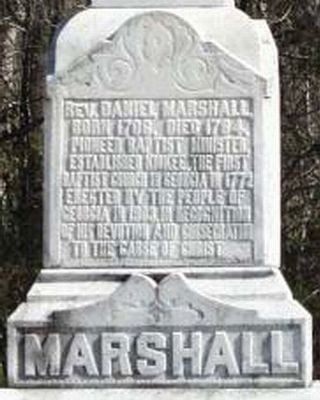 0.22 miles
No Reviews
Favorite
In the median of US 221, near the Appling courthouse, the people of Georgia, in 1903, erected a monument to Daniel Marshall and his “devotion and consecration…to the cause of Christ.” (See Chapter 15.). copyrighted and used by permission from David Beale, Baptist History in England and America: Personalities, Positions, and Practices   Rev. Daniel Marshall Born 1706, Died 1784, Pioneer Read more...
View all