Numbers 20:11 And Moses lifted up his hand, and with his rod he smote the rock twice: and the water came out abundantly, and the congregation drank, and their beasts also.

In late 1863, the Confederate States of America needed a place to hold Union prisoners of war.

Though the Confederates would not win the war, they had captured over 181,000 Union soldiers. They needed a secure area far from the battle front. Camp Sumter was 26.5 acres and built for 10,000 prisoners. It would soon hold over 32,000.

Union soldiers from the cold North (like Wisconsin!) “wounded and starving, in horrific conditions with rampant disease, contaminated water, and only minimal shelter from the blazing sun and the chilling winter rain.” According to the National Park Service, 45,000 Union prisoners were admitted, and 12,920 died in the camp.

Robert Morgan, in his book 100 Bible Verses that Made America, records

Sergeant Shepherd said something to this effect: “I have today read in the book of Numbers of Moses striking the rock from which water gushed out for the ample supply of man and beast. I tell you God must strike a rock in Andersonville or we shall all die of thirst. And if there is no rock here, He can smite the ground and bring forth water to supply our desperate needs. Of this I am sure; let us ask Him to do this.

After a few days of prayer, a storm rolled in and “the mighty deluge swept through the clearing west of the prison.”

According to the prisoners, lightning struck a rock, opening up an underground spring. Prisoners lined up to fill their canteens from this miraculous spring.

The National Park Service states that by the 1880s, Union survivors would visit the spring on Memorial Day. In 1901, a shelter was built to protect the spring.

From the Porter County Genealogy:

The prison covered about twelve acres, enclosed by pine logs twenty-five feet long. Sentry boxes were fifty feet apart, and the dead line ten feet from the stockade. Four acres were swamp and four acres were added during the summer, as the number of prisoners increased to 35,000 men. During August and September the deaths were 300 per day. A great religious awakening was started by Sergeant Shepherd, in the fall when the suffering was the greatest. 6,000 were converted during this revival, and religious enthusiasm ran high. When the revival was closing one night, Sergeant Shepherd preached on Faith and alluded to the Rock of Israel. Our subject and many others prayed and petitioned the Almighty for water, many perishing every day for want of it. The prayers were directly answered in the most astonishing manner, for the next morning a beautiful spring of pure, clear water appeared. It was called Providence Spring. –Porter County Genealogy  original Google Books

During a heavy rainstorm on August 14, 1864, a spring suddenly gushed from this hillside. The prisoners were desperate for fresh water, and over time the event became legendary. Several men claimed to have seen lightning strike this spot just before the spring burst forth.

This damp slope, with its many natural seeps, would appear to be a likely site for a spring. Workmen may have inadvertently buried the spring’s outlet while digging the stockade trench. Whether an act of nature or divine providence, the effect of the stream was an answer to thousands of prayers.

“A spring of purest crystal water shot up into the air in a column and, falling in a fanlike spray, went babbling down the grade into the noxious brook. Looking across the dead-line, we beheld with wondering eyes and grateful hearts the fountain spring.”
John L. Maile, 8th Michigan Infantry August 15, 1864. 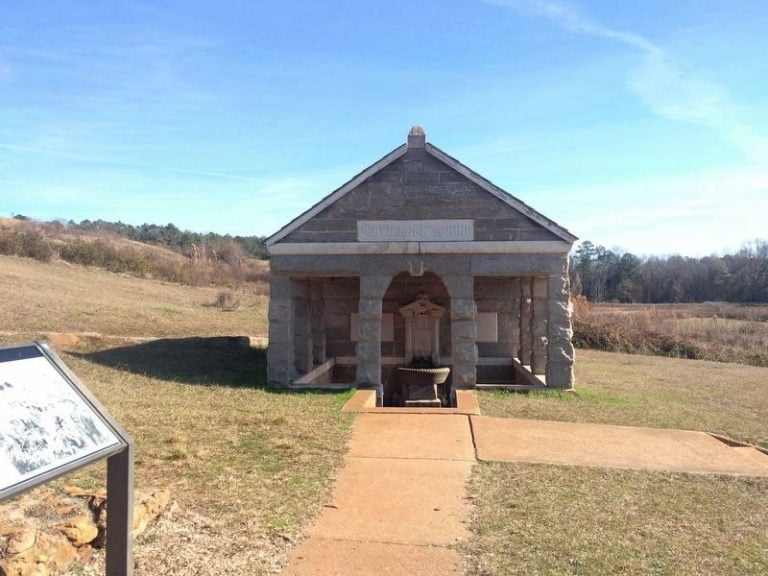