After almost two years of ministry, he fled the colony. Something was missing. He returned to England, and on May 24, 1738, had an “Aldersgate experience.”

During his time in Georgia, though he intended to minister to the Native Americans, he was the pastor of the “expats” Englishmen in the town. He also started learning Spanish to reach a Jewish audience. But his ministry involved much conflict with the parishioners, correcting their speech and behavior. And then, romance struck and was the end of his ministry!

The 33-year-old John Wesley fell in love with the 18-year-old Sophia Hopkey, but fearing she would hinder his ministry to the Native Americans, declined to marry her. She quickly then became engaged to another man. When she failed to comply with a technicality in the Book of Common Prayer, the very technically correct John Wesley refused her Communion. The new Mrs. Sophia Williamson saw it as defamation, and had a warrant out for his arrest on August 8, 1737. Wesley was afraid of the grand jury:

Of this grand jury (forty-four of whom only met), one was a Frenchman, who did not understand English; one a Papist, one a professed infidel, three Baptists, sixteen or seventeen other Dissenters, and several others who had personal quarrels against me and had openly vowed revenge

Wesley felt the call to England, and declared “I shook off the dust of my feet and left Georgia.”

went very unwillingly to a society in Aldersgate Street, where one was reading Luther’s Preface to the Epistle to the Romans. About a quarter before nine, while he was describing the change which God works in the heart through faith in Christ, I felt my heart strangely warmed. I felt I did trust in Christ, Christ alone for salvation, and an assurance was given me that he had taken away my sins, even mine, and saved me from the law of sin and death.

In the years to come, circuit riding Methodist preachers would spread the gospel all over the American colonies. 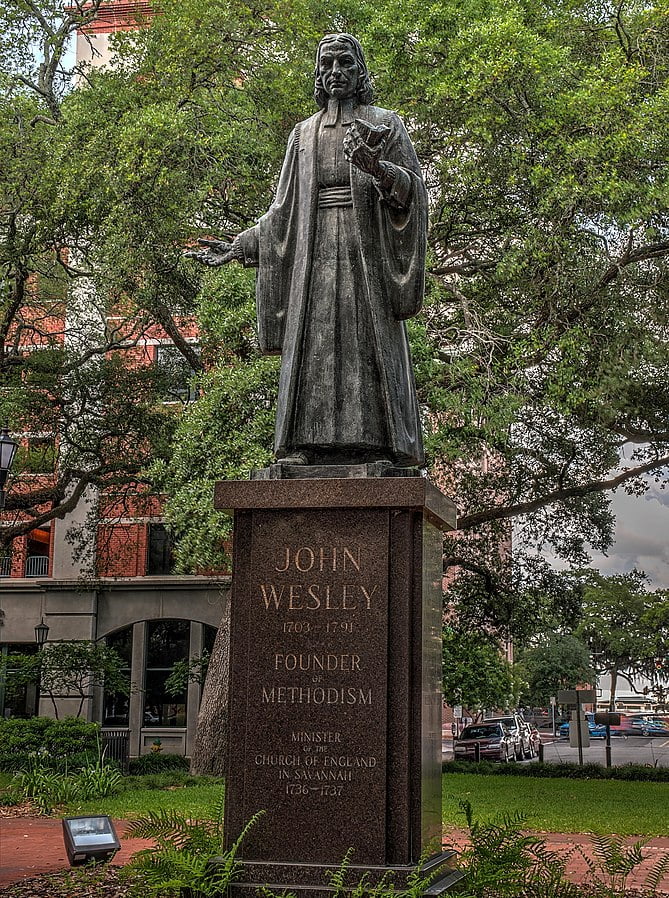