On this site in 1831, John Mason Peck (1789-1858), pioneer Baptist preacher, author, and educator, established the school which became Shurtleff College. In 1817, Peck had left his home in New England with a vision “to bring the lamp of learning and the light of the gospel” into the undeveloped West. He, his wife Sally, and three children endured an arduous four month trip in a small one-horse wagon, setting in Rock Spring, near O’Fallon, Illinois.

There, in 1827, Peck founded Rock Spring Seminary, the first institution of its kind in the State of Illinois. In 1831, the seminary was moved to the growing city of Alton, where, in 1836, the name was changed to Shurtleff College, recognizing the gift of $10,000 from Dr. Benjamin Shurtleff of Boston.

John Mason Peck is well described as a missionary and a teacher, an author and an editor, a geographer and a cartographer, and a promoter of churches, schools, and western settlement. For thirty years, he was undoubtedly one of the strongest advocates of education and righteousness in the entire Mississippi Valley. He traveled hundreds of miles by horseback or wagon, often under most difficult circumstances, while his wife and children bore his long absences with fortitude.

Peck was one of the foremost ministerial opponents of slavery in Illinois and provided great support to Governor Edward Coles’ successful anti-slavery effort in 1824. In 1851, he was honored with a Doctor of Divinity degree from Harvard University. He died on March 16, 1858, and is buried in Bellefontaine Cemetery in St. Louis.

Peck became active in establishing Bible societies and Sunday School associations. Distributing Bibles “silently undermine[d] the opposition to missions” of geographically stable preachers such as Daniel Parker, as well as spread literacy and Christian principles (including temperance and opposition to slavery) among the dispersed rural population. Peck moved to Rock Springs, Illinois in 1822 to farm, and arranged a circuit to visit the various societies which he continued to establish, as well as isolated farms. On one trip, Peck visited Daniel Boone, then nearly 80, and later wrote a book about the frontiersman’s life.

In 1824 Peck’s preaching helped Illinois Governor Edward Coles defeat efforts to revise Illinois’ constitution to permit slavery. Four years later, black Baptists in St. Louis sought to establish their own church, and with Peck’s help they established the African Church of St. Louis (later renamed the First Baptist Church of St. Louis). Of the original 220 members, 200 were slaves. Peck ordained a young freeman, John Berry Meachum, as their pastor.[4] When that church’s members voted themselves out of existence, Peck helped establish the Second Baptist Church in 1833, serving as its interim minister three times in the 1840s.

Convinced that Baptists could not rise without educated preachers, Peck founded a seminary at his Rock Springs farm near O’Fallon, Illinois, but his first attempt to secure a charter failed because of opposition by an anti-mission preacher/legislature. Undeterred, Peck moved his new school to Upper Alton, Illinois. In 1836, after a significant contribution from Benjamin Shurtleff, M.D. of Boston, it became Shurtleff College, which became part of the Southern Illinois University system in 1957.[5] Peck then established the Illinois Baptist Education Society, serving as its first secretary.

The American Baptist Home Mission Society was organized in 1832, under Peck’s influence, with Jonathan Going (sent from Massachusetts at his request the previous year) as the first secretary. This society, like Peck, directed its efforts toward the people of the frontier: Settlers, Native Americans and later former Confederate slaves. 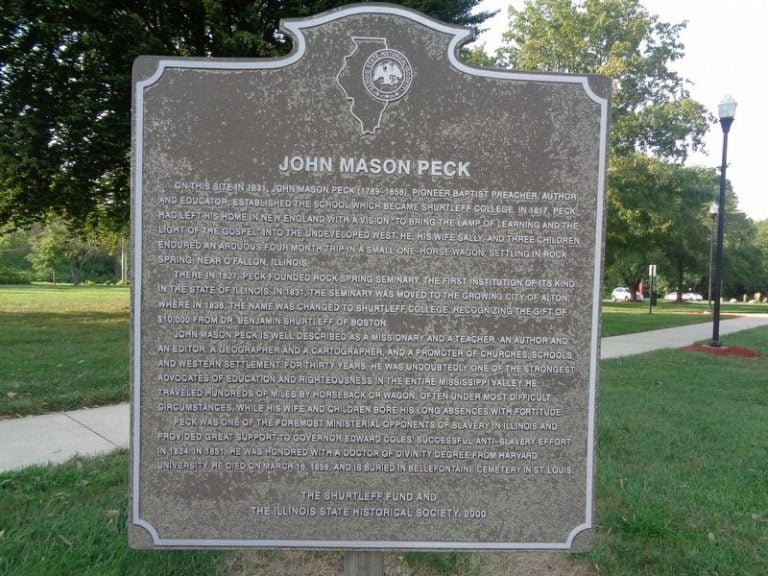