It was a five mile walk along the CB&Q railroad track, but the teenager, who also worked long hours at a coal mine, had heard about the Salvation Army meetings in Canton and decided he wanted to see what it was all about.

Meetings at that time often lasted until 11 p.m., but after walking the five miles home after the meeting, the young man decided he wanted to hear more and returned. At one of those meetings, he answered the invitation to accept Christ and knelt at the old wooden bench which was the Canton Salvation Army’s penitent form.

That was how George Bennard began his life as a Christian. He was sent as a cadet to a number of different corps for training and from 1898 to 1908 he served as a captain in the Army. Later he became a minister in the Methodist Episcopal Church.

If the name isn’t familiar, a quick glance into most church hymnals will provide the reason why this was so important. Bennard is the author of “The Old Rugged Cross,” one of the best known and loved hymns of the Christian faith.

In her story “The Old Rugged Cross,” which appeared in the April 11, 1936, issue of “The War Cry,” Mrs. Brigadier Margaret Troutt shared Bennard’s story of how this song came into being.

It was 1913 when Bennard first played the song for Rev. and Mrs. L.O. Bostwick in a small Michigan town where Bennard was holding revivals. But the history of the song was much more detailed.

“For months I had been meditating upon the Cross, my thoughts filled with its vital importance,” Bennard was quoted as saying. “And one day, quite suddenly there came to me the words I used as the title: ‘The Old Rugged Cross.’ I stopped what I was doing and prepared to write the song, but inspiration would not come. After some hours spent in futile effort, a voice said, ‘Wait, wait,’

“In the weeks that followed, I gained a deeper understanding of the Cross. I became acquainted with despair and the song grew on me continually, developing until at last, when the dark clouds of trouble had rolled away, the words and music were complete.

“So I first sang it in the kitchen of that little parsonage, strumming an accompaniment on a guitar. I well remember the electrical effect the simple little song had upon Brother and Sister Bostwick. Never in my experience, I think, have I seen anyone so genuinely moved.

“After I finished playing the song, the three of us were wrapped for a few moments in comforting silence. Then Sister Bostwick said to me in a voice that was husky with emotion, ’Brother Bennard, that song will never die.”

Bennard went on to say that everywhere he went, people from all walks of life told him how much the song meant to them or to friends who were ill.

“Whether the hymn is deserving of all the acclaim is has had, I do not know,” Bennard said. “But I am sincerely glad that songs of the Cross have won so many hearts. And surely I would be less than human if I were not humbly glad that, of such songs, one was given to me to write.”

And in the sanctuary of the Salvation Army in Canton, the same wooden bench on which Bennard knelt to accept Christ can still be seen. 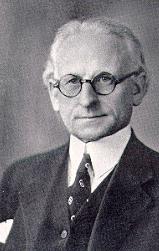