On the back campus of Phillips Academy, one can walk down “Judson Road” and visit the secluded area by the “Rabbit Pond,” where Adoniram Judson, Luther Rice, and other believers kneeled each morning by a huge boulder, prayer for missions, and dedicated their lives to God. On that boulder (affectionately called “Missionary Rock“), citizens of Andover, in 1910, affixed a memorial plaque, honoring the faithful prayer band of Andover students. See the section, “Missionary Rock at Andover Theological Seminary,” in Chapter 17.

Andover Center for History & Culture has a photo of the rock.

From the Andover Townsman:

It was Carpenter who originated the idea of the Missionary Boulder at Rabbit’s Pond on the campus of Andover’s Phillips Academy to celebrate the 100th anniversary of the American Board of Foreign Missions. He even found the boulder, weighing several tons, in its natural resting place in Carmel Woods. Assured by geologists that the rock would last for hundreds of years, a tablet was attached with the following inscription:

“In the missionary woods, once extending to this spot, the first missionary students of Andover Seminary walked and talked one hundred years ago, and on this secluded knoll met to pray. In memory of these men: Adoniram Judson, Samuel Nott, Samuel J. Mills, Samuel Newell, Gordon Hall, James Richards, Luther Rice, whose consecrated purpose to carry the Gospel to the heathen world led to the formation of the first American Society for Foreign Missions.

“In recognition of the two hundred and forty-eight missionaries trained in Andover Seminary, and in gratitude to the Almighty God, this stone is set up in the centennial year of the American Board … 1910.” 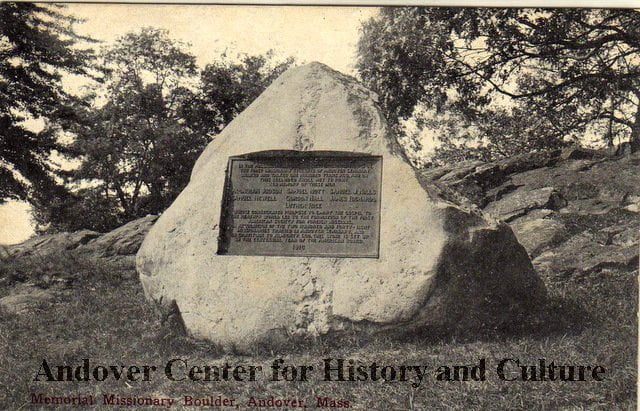