John Eliot (1604-1690) was born in Widford, England, and graduated from Cambridge. He worked for Thomas Hooker (founder of Connecticut) at his school in Essex. When Hooker escaped England for the Netherlands, Eliot came to Boston in 1631, where he helped compile the Bay Psalm Book. For over forty years he would preach in Roxbury.

Many of the Christians who came to America sought to reach the Native Americans with the gospel, but were limited because of a lack of a common language. Cockenoe, a young native was able to speak Massachusett (Wampanoag) and English.

In 1646, his first try at preaching in the Massachusett language was unsuccessful. Eventually he was able to preach, and in 1651 build a meetinghouse with the converts in Natick. Also included was a Prophet’s Chamber (Let us make a little chamber …. and it shall be, when he cometh to us, that he shall turn in thither. 2 Kings 4:10)

20 miles west in Grafton is the marker for the first Praying Town at Hassanamesit (GPS: 42.206800, -71.685150). Soon there would be a dozen meetinghouses, and Eliot was able to train the native Takawambit to continue his ministry.

By 1663 he was able to translate the Bible into Massachusett and print the Eliot Bible – the first Bible printed in the New World (the English Bible would not be printed until the Aitken Bible in Philadelphia).

On this site John Eliot helped his Indian converts to build their first meetinghouse in 1651, with a “prophet’s chamber” where he lodged on his fortnightly visits to preach to them in their language. His disciple Daniel Takawambait succeeded to the pastoral office in 1698. 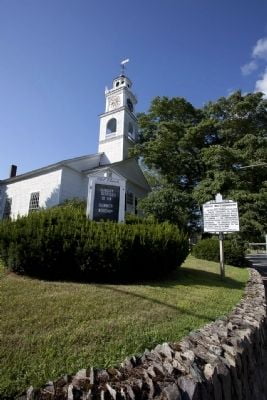