David Brainerd (1718-1747) died at age 29, but inspired missionaries such as William Carey and Jim Eliot.

He was a struggling farmer but during the Great Awakening on July 12, 1739, “the Lord… brought me to a hearty desire to exalt him, to set him on the throne, and to ‘seek first his Kingdom,’ i.e., principally and ultimately to aim at his honor and glory as the King and sovereign of the universe.”

He enrolled in Yale but was expelled during a controversy between the Old Lights and the New Lights. The New Lights embraced him, and the Society in Scotland for Propagating Christian Knowledge supported his missionary work.

Working in Pennsylvania among the Delaware Native Americans, Moses Tunda Tatamy, was baptized in 1745 (GPS: 40.740750, -75.259233). “Though before he had been a hard drinker…it is now more than six months since he experienced this change; in which space of time he has been exposed to strong drink in places where it has been moving free as water; yet has never desired after it

Offered a comfortable parish in the city, the young man who was afflicted by depression, tuberculosis, consumption, and other maladies wrote “All my desire was the conversion of the heathen, and all my hope was in God: God does not suffer me to please or comfort myself with hopes of seeing friends, returning to my dear acquaintance, and enjoying worldly comforts.”

Instead of a comfortable parsonage, he lived in a log cabin here, travelling 3,000 miles by horseback.

On October 9, 1747, he died in Jonathan Edwards’ home of tuberculosis. Edwards’ 17 year old daughter Jerusha caught TB from Brainerd as she cared for him, and died the following February. They are buried side by side in Bridge Street Cemetery, Northampton, MA (GPS: 42.326141, -72.627478)

Later, Yale named a hall in the Divinity School after the student they expelled.

David Brainerd (April 20, 1718 – October 9, 1747) was an American missionary to the Native Americans who had a particularly fruitful ministry among the Delaware Indians of New Jersey. During his short life he was beset by many difficulties. As a result, his biography has become a source of inspiration and encouragement to many Christians. Missionaries such as William Carey and Jim Elliot, and Brainerd’s cousin, the Second Great Awakening evangelist James Brainerd Taylor (1801–1829) have been motivated by the ministry of David Brainerd. 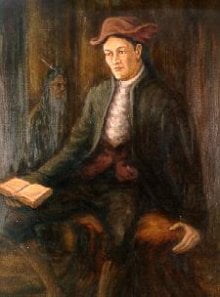 0.52 miles
No Reviews
Favorite
Jonathan Edwards was assistant pastor of the Northampton church from 1726 to 1729, and senior pastor from 1729 to 1750. Edwards started in the “Second Meetinghouse” and built the “Third Meetinghouse” during the Great Awakening in 1737. The current structure, aka “The Fifth Meetinghouse,” was built in 1878. Related Read more...
View all