George Bennard was born in Youngstown, Ohio, but his parents would move to Iowa.

After training and working for the Salvation Army, he became a traveling evangelist with the Methodist Episcopal church.

“For months I had been meditating upon the Cross, my thoughts filled with its vital importance, and one day, quite suddenly there came to me the words I used as the title: ‘The Old Rugged Cross.’ I stopped what I was doing and prepared to write the song, but inspiration would not come. After some hours spent in futile effort, a voice said, ‘Wait, wait,’

“In the weeks that followed, I gained a deeper understanding of the Cross. I became acquainted with despair and the song grew on me continually, developing until at last, when the dark clouds of trouble had rolled away, the words and music were complete.

“So I first sang it in the kitchen of that little parsonage, strumming an accompaniment on a guitar. I well remember the electrical effect the simple little song had upon Brother and Sister Bostwick. Never in my experience, I think, have I seen anyone so genuinely moved.

The first verse was written in Albion, Michigan. It was first performed at the Friends Church in Sturgeon Bay, Wisconsin. Once it was finished, it was performed June 7, 1913, at the Methodist Episcopal Church in Pokagon, Michigan. Made popular by Billy Sunday’s songleader, Homer Rodeheaver, the song is known worldwide.

In 1998, Robert and Molly Shaffer began a 15 year project to restore the Pokagon church to its 1913 condition.

Circuit-riding Methodist ministers held religious services in Pokagon Township during the 1830s and 1840s. A class was organized in Sumnerville in 1840. In 1876 the Methodists purchased this building, which had been built in 1862 as a hops barn, and renovated it as a church. They constructed a belfry and installed pews and stained glass windows in pointed frames. In this church, in 1913, “The Old Rugged Cross” was sung in its entirety for the first time. The following year the Methodists purchased the nearby Baptist Church, selling this building to John Phillips who used it as a storage barn. In 1998 the Pokagon United Methodist Church reacquired the church for restoration.

In January 1913 the Reverend Leroy O. Bostwick, assisted by the Reverend George Bennard of Albion, held a series of religious revivals at the Pokagon Methodist Episcopal Church. Before the event, the Dowagiac Daily News predicated a large attendence, announcing “Mr. Bennard is a sweet singer and a splendid gospel preacher.” Bennard had begun composing the hymn “The Old Rugged Cross” while in Albion the previous year. He completed the hymn here in preparation for the revival services. During the revival it was sung publically for the first time by the Pokagon Methodist Episcopal Church choir. Impressed by Bennard’s hymn, the Reverend and Mrs. Bostwick financed its first printing. The “Old Rugged Cross” quickly became one of the popular hymns in the United States. 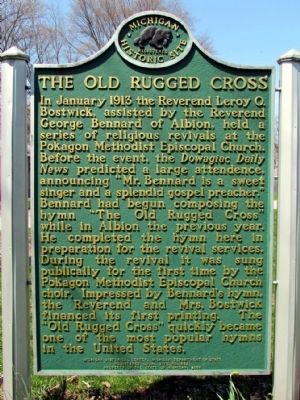