William Bell Riley (March 22, 1861 in Greene County, Indiana, USA – December 5, 1947 in Golden Valley, Minnesota) was known as “The Grand Old Man of Fundamentalism.” After being educated at normal school in Valparaiso, Indiana, Riley received his teacher’s certificate. After teaching in county schools, he attended college in Hanover, Indiana, where he received an A.B. degree in 1885. In 1888 he graduated from the Southern Baptist Theological Seminary in Louisville, Kentucky. In 1908, the Southwestern Baptist University of Jackson, Tennessee, conferred upon Riley an honorary D.D. degree.[1] He served several Baptist churches in Kentucky, Indiana, and Illinois before taking the pastorate at the First Baptist Church in Minneapolis, Minnesota in 1897.

In 1878, at the age of 17, Riley publicly professed faith in Christ. He had planned to study law, but shortly after his conversion he felt called to the ministry. He became pastor of the First Baptist Church, Minneapolis, Minnesota on March 1, 1897. He resigned after forty-five years but served as pastor emeritus until his death five years later. Riley wrote a number of texts on Christian Evangelism and founded the Northwestern Bible Training School along with an Evangelical Seminary.

Theologically, Riley was a Baptist traditionalist who subscribed to the New Hampshire Confession of Faith of 1833, the most popular Baptist creed of the 19th century. His first major work was an exposition of the Confession and in 1922 he tried to help the fundamentalist faction of the Northern Baptist Convention gain control and reject theological liberalism by convincing the Convention to adopt the Confession as its binding statement of faith.

Riley was the editor of The Christian Fundamentalist from 1927 to 1932. In 1919 Riley founded the World Christian Fundamentals Association. Riley was president of the Minnesota Baptist State Convention in 1944-45. When Riley died in 1947, Billy Graham, whom Riley had chosen to succeed him as president of Northwestern, conducted the funeral services. At Riley’s death Northwestern Bible School was the second largest Bible School in the world, with some 1,200 students enrolled.

In 1923 Riley set up the Anti-Evolution League of Minnesota, which blossomed the following year into the Anti-Evolution League of America (later run by T. T. Martin). While the anti-evolution crusade is often thought of as a Southern phenomenon, two of its foremost leaders, Riley and John Roach Straton, were from Minneapolis and New York City respectively. In the early 1920s Riley promoted a vigorous anti-evolutionary campaign in the Northwest and it was Riley’s World Christian Fundamentals Association that wired William Jennings Bryan urging him to act as counsel for the association in the Scopes Trial.[2]

Riley and Bryan tried to remove all teaching of evolution from public schools. One of the creationists in their movement, T. T. Martin claimed that German soldiers who killed Belgian and French children by giving them poisoned candy were angels compared to those who spread evolution ideas in schools.[3] Riley also claimed that “an international Jewish-Bolshevik-Darwinist conspiracy to promote evolutionism in the classroom”[4] was behind the changes in curriculum occurring in the 1920s. Riley advocated a form of “Day-Age Creationism“.[2]

The main objection that Riley had to evolution was:

The first and most important reason for its elimination is in the unquestioned fact that evolution is not a science; it is a hypothesis only, a speculation[5] 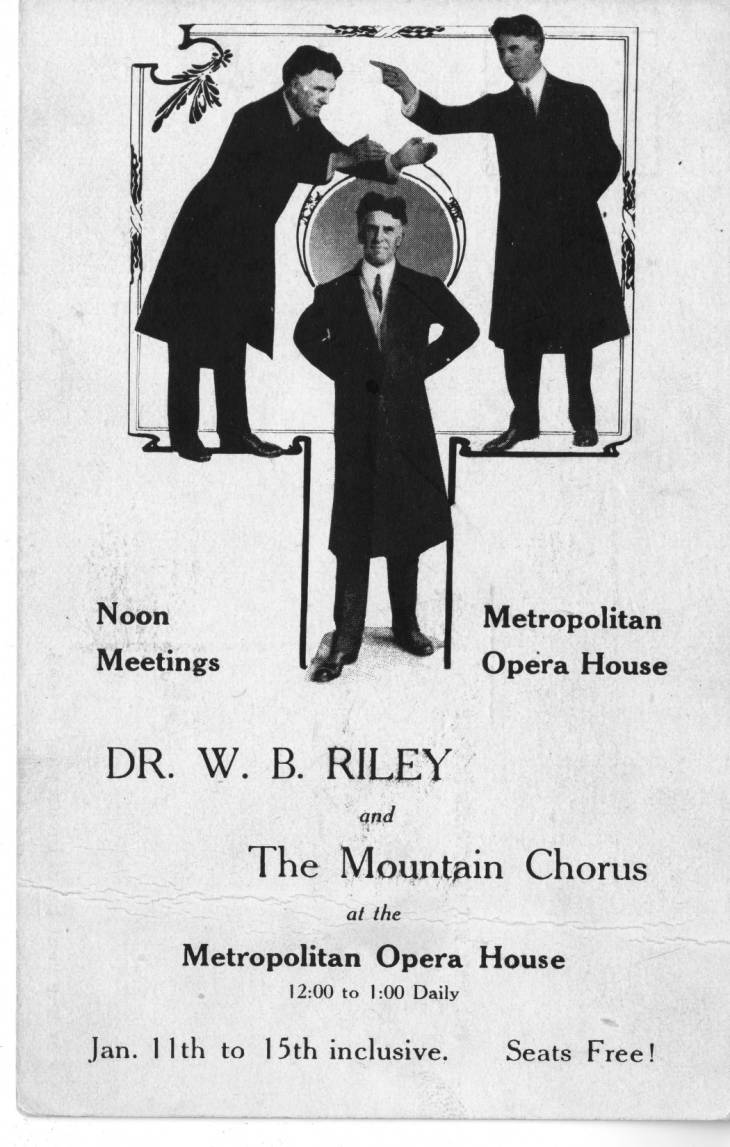