On our road trip filming the first season of Our Christian Heritage TV, we had just interviewed a Philip Bliss impersonator, who shared the life and songs of the second most famous Christian hymnwriter.

Philip Bliss (1838-1876), wrote many songs in our hymnals, including “Almost Persuaded,” “Wonderful Words of Life,” “Let the Lower Lights Be Burning,” “I am so glad that Jesus loves me,” “Man of Sorrows,” “Whosoever Will,” “The Light of the World is Jesus,” “Hold the Fort,” and “Dare to Be a Daniel.”

The Blisses had spent Christmas with their family in Pennsylvania, and leaving their children with relatives, were headed to Chicago to Moody’s Tabernacle for meetings with Daniel Webster Whittle.

The train was running over an hour late on December 29th, 1876 when it left Erie for Cleveland. 160 souls were on board. The 11 year old bridge was ‘experimental’ with much controversy in the engineering and fabrication.

The blizzard didn’t help the situation either. As the train started to cross the bridge – just 1,000 feet from the Ashtabula Train Station, the engineer heard a crack.

The train was slowing down to 10 mph – but the engineer fired up the engine to try to make it across. The front engine, the Socrates made it. The second engine, Columbia, and the 11 cars did not.

The wooden cars plunged down into the ravine, and quickly caught fire. The fire brigade arrived, but the chief was drunk and did nothing. Even if they had, there was no hospital in town, so survivors were taken to a disgusting hotel, or for the lucky, private homes.

Sadly, the thieves made it to the train about the same time as the railroad employees. But between being crushed by the other cars, frozen in the snow, and the fire from the boilers, at least 83 died in the greatest train disaster to this point in American history.

Among the dead were Philip Bliss and his wife. One report says he survived the crash, but went back to find his wife and was killed trying to rescue her.

As a result of the wreck, Ashtabula finally got a hospital, located near the site of the wreck itself and next to the historical marker. Many of the body parts retrieved were unable to be identified, and were buried in a mass grave at Chestnut Grove Cemetery.

Bliss’s luggage came in a separate train, and when it arrived his friends went thru his bags and found the words to a hymn he was working on. James McGranahan composed a tune for the words:

I will sing of my Redeemer,

And His wondrous love to me;

On the cruel cross He suffered,

From the curse to set me free.

Sing, oh, sing of my Redeemer,

With His blood He purchased me,

On the cross He sealed my pardon,

Paid the debt, and made me free

A cenotaph is near his family home in Rome, Pennsylvania. 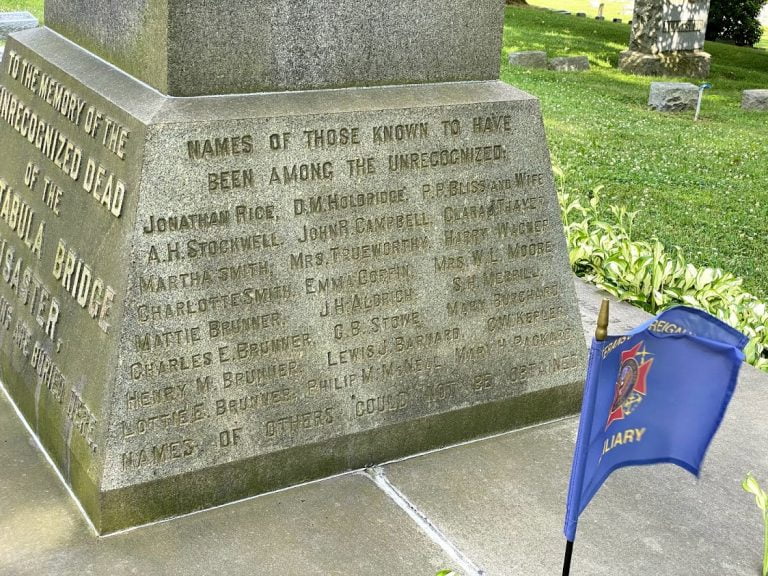 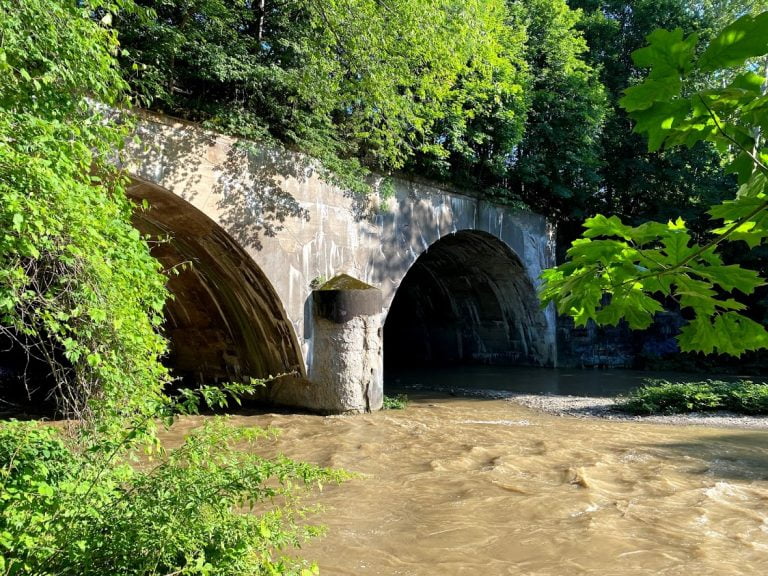 1.55 miles
No Reviews
Favorite
Phillip Bliss and his wife were headed from their home in Rome, Pennsylvania, to Chicago to reunite with the evangelist D. L. Moody. On December 29th, 1876, their train, the Pacific Express was crossing a trestle bridge near Ashtabula, Ohio. The bridge collapsed, and the train cars fell into the ravine. In that day, each train car had a stove Read more... 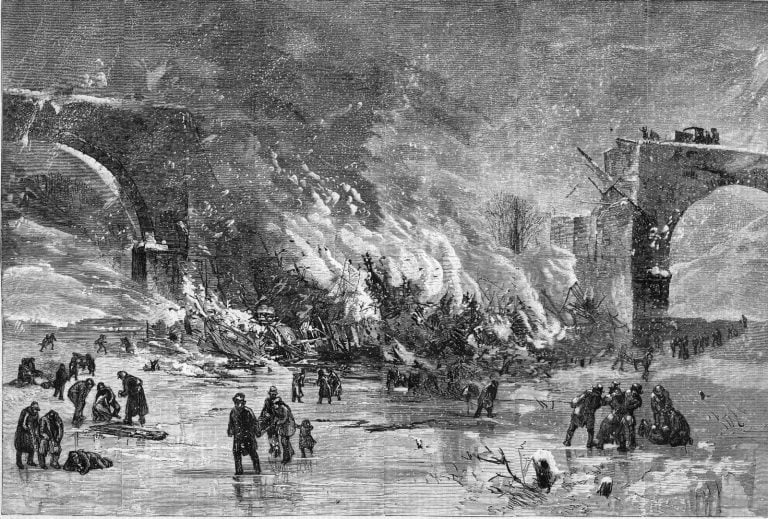 1.67 miles
No Reviews
Favorite
Watch a short video about Phillip Bliss filmed on location From the Marker: “Near this site, an iron truss bridge collapsed into the Ashtabula River during a blizzard, plunging a passenger train with 160 on board into the gulf below. Nearly 100 people were killed in this, one of the worst train disasters in American history. The most well known Read more... 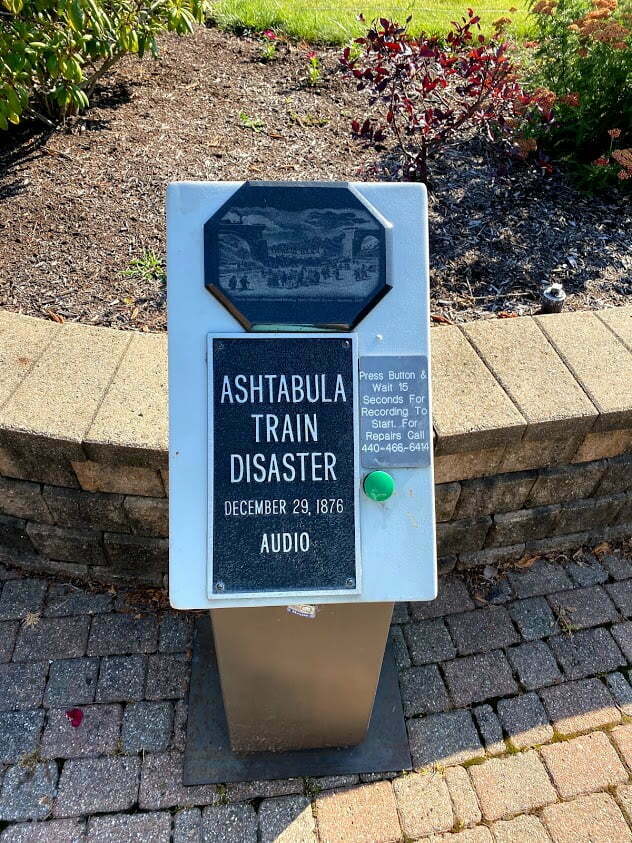 1.76 miles
No Reviews
Favorite
Listen to a 10-15 minute audio narrative of the Ashtabula Train Disaster and learn more about Phillip Bliss in front of the hospital that was built as a result of the horrific disaster. Related Read more... 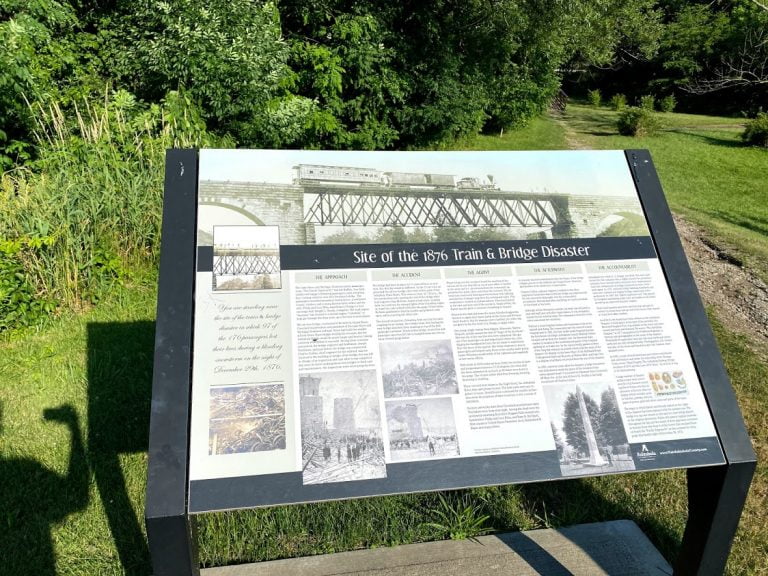