Rev. Robert Lowry was born in Philadelphia, Pennsylvania on March 12, 1826 and at age 22 entered the University of Lewisburg (now Bucknell University). After graduating at age 28 he served as pastor in West Chester, PA; New York City; Brooklyn; and then returned to Lewisburg, where he was a professor and received an honorary doctorate.

Monument Text: The famed hymn-writer lived in this house, 1869-75. Here, some of his best known hymns were written. His music was sung in many foreign lands. One of his works is, “Shall We Gather at the River.” Lowry died in 1899.

In 1864 a heat wave struck Brooklyn. It seemed to Lowry to contrast with the heavenly city as recorded in Revelation 22:1: “And he shewed me a pure river of water of life, clear as crystal, proceeding out of the throne of God and of the Lamb.” Even though it wasn’t his favorite, that song became the favorite of many:

Shall we gather at the river,
Where bright angel feet have trod;
With its crystal tide forever
Flowing by the throne of God?

In addition to songs he worked on with Fanny Crosby like “All the Way My Savior Leads Me,” Lowry wrote this song in 1876 based on Revelation 1:5 and Revelation 7:14

Refrain:
O precious is the flow
that makes me white as snow;
no other fount I know;
nothing but the blood of Jesus.

On Easter Sunday you’ll likely hear his testament to the Resurrection:

Refrain:
Up from the grave he arose;
with a mighty triumph o’er his foes;
he arose a victor from the dark domain,
and he lives forever, with his saints to reign.
He arose! He arose! Hallelujah! Christ arose!

And, you’ll recognize the chorus to “I need thee every hour.” While Lowry didn’t write the stanzas, he did write the refrain:

Refrain:
I need thee, O I need thee;
every hour I need thee!
O bless me now, my Savior,
I come to thee. 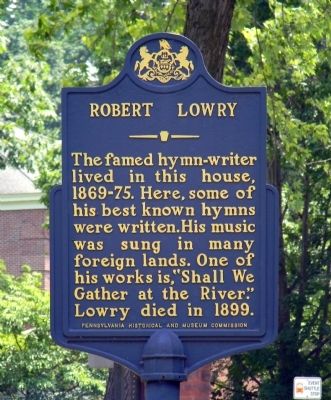