When planning a shoot for our TV/ program, we try to group geographically proximate locations together. It so happened that while planning an interview with the son of Singspiration founder Al Smith, nearby we found a documented site tied to the old spiritual, “The Old Time Religion.”

In 1834, the South Carolina Lutheran Synod purchased this building and started a seminary here. Dr. Ernest Hazelius, as headmaster, lived in the building before the Civil War. But the fame of the place comes about 40 years later, in 1889.

In 1889, the Leaphart family owned the Hazelius house, and their friend Charles Davis Tillman was staying with them. He was assisting his father, a Baptist preacher, with a tent meeting. Following their revival meeting in Lexington, South Carolina, an African America group asked to use the tent, and the Tillmans obliged. While they were singing, the music struck the younger Tillman. He asked the song leader about the music, and the choir leader shared the song with Tillman.

“The Old Time Religion” was previously published in a different form in 1873, by the Fisk University Jubilee Singers, but Tillman was able to popularize the song, especially among white congregations.

Built c. 1820 by the Gross family and bought by the Lutheran Synod in 1834, this house served as home to the Lutheran Seminary’s headmaster, Dr. Ernest Hazelius, during that school’s location here 1834-1858. Theologian, historian, author, and educator, Dr. Hazelius (1777-1853) was its most important occupant. In 1891, Charlie Tilman, a traveling evangelist, wrote the hymn, “Old Time Religion,” while a guest here of the Leaphart family. The house is listed on the National Register of Historic Places. 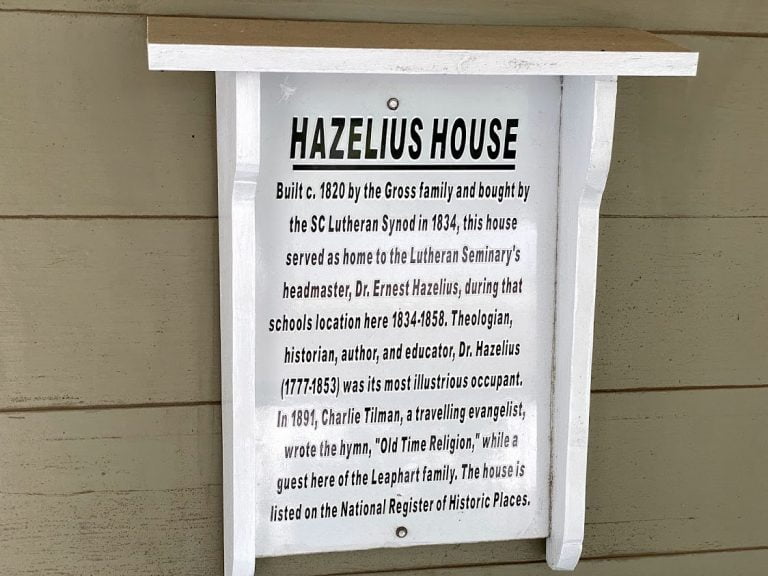