On Washington Avenue, stands the Thomas Jefferson Religious Freedom Monument, made from stones sent from churches across the country. It commemorates Jefferson’s Virginia Religious Freedom Statute, promising that “no man shall… suffer on account of his religious opinions or belief.” The Statute became the basis for the religion clause of the First Amendment.

When President John F. Kennedy spoke at an event for Nobel Prize winners from the Western Hemisphere, he said “I think this is the most extraordinary collection of talent, of human knowledge, that has ever been gathered together at the White House, with the possible exception of when Thomas Jefferson dined alone.”

Of all of Jefferson’s achievements, he chose to mark only three on his tombstone, author of the Declaration of Independence, author of the Statue of Religious Freedom, and father of the University of Virginia.

It took almost ten years from the first meeting in 1777, until the General Assembly passed it in 1786, but eventually religious freedom was protected by the government.

Whereas Almighty God hath created the mind free; that all attempts to influence it by temporal punishment or burthens, or by civil incapacitations, tend only to beget habits of hypocrisy and meanness, and are a departure from the plan of the Holy author of our religion, who being Lord both of body and mind, yet chose not to propagate it by coercions on either, as it was in his Almighty power to do;

Jefferson went on to declare, “if any act shall be hereafter passed to repeal the present, or to narrow its operation, such as would be an infringement of natural right.”

Note the argument of ‘natural law’ – as we observe the Almighty Creator, he had the power to command worship in this dispensation, but chose not to, therefore we should likewise refrain, and allow man to love God freely, and not of compulsion

From a meeting in Fredericksburg, January 3-17, 1777, of a Committee of Revisors appointed by the General Assembly of Virginia, composed of Thomas Jefferson, George Mason, Edmund Pendleton, George Wythe and Thomas Ludwell Lee to “settle the plan of operation and to distribute the work” evolved The Statute of Religious Freedom authored by Thomas Jefferson in the document the United States of America made probably its greatest contribution to government recognition of religious freedom.

This memorial marks the site of a celebration on October 16, 1932, by representatives of the leading religious faiths in America, commemorative of the religious character of George Washington, whose boyhood home was Fredericksburg; and of the separation of church and state, as the Virginia “Bill for Establishing Religious Freedom” was outlined by a committee consisting of Thomas Jefferson, George Mason, Edmund Pendleton, George Wythe and Thomas Ludwell Lee which met in this city on January 13, 1777. 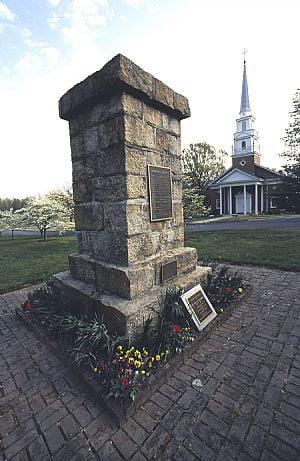 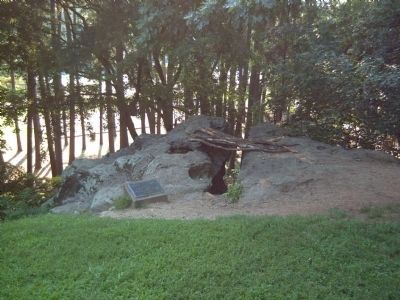 159 feet
No Reviews
Favorite
Marked by a tall obelisk at 1500 Washington Avenue, is the grave of George Washington’s mother. Near the obelisk, an inscription on Meditation Rock says of her, “Here Mary Ball Washington prayed for the safety of her son and country during the dark days of the Revolution.” Mary’s home is at 1200 Charles Street. copyrighted and used by permission from David Read more...
View all