He lay in Chesterfield jail in 1773 5 months for preaching.

In the cemetery behind Shockoe Baptist, a memorial cenotaph inscription reads:

Lay in Jail in Chesterfield Co. in 1773 five months for preaching.

A sufferer for conscience sake

An earnest and faithful minister of the Gospel.

One half mile west is the grave of Elder John Weatherford (1740?-1833) Baptist preacher for 70 years and early advocate of religious liberty. Jailed five months in Chesterfield in 1773 for unlicensed preaching, his release was secured by Patrick Henry. 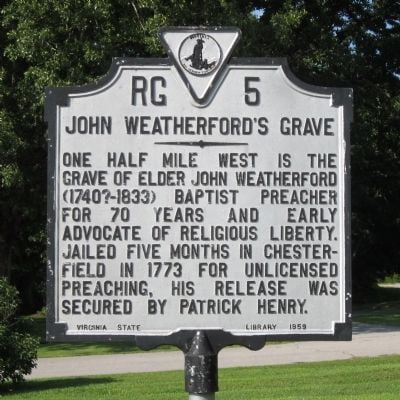