Composer and author Ida L. Reed was born on a hilltop farm near Philippi on November 30, 1865. In the face of illnesses, family deaths, and constant poverty, she was a devout Methodist all her life.

She wrote some 2,000 hymns and songs, many of which have been translated into other languages. Her best-known composition was “I Belong to the King,” which still appears in Protestant hymnals. An estimated four million copies of this hymn have been circulated.

Reed also wrote poems and children’s Sunday school stories, which have appeared throughout the world. She wrote several books, including her autobiography, My Life Story, and The Story of a Song: What It Means to Belong to the King. Her last book, published in 1940, was Songs of the Hills. Reed also wrote for a Christian journal titled West Virginia Protestant.

Self-educated, Ida Reed never earned royalties on her work. Instead, she sold her songs outright for a few dollars each. She died in 1951 at age 85. A historical marker on the Arden Road north of Philippi points the way to her grave and former home.

Career
Reed composed cantatas, poems, and hymns, totaling over 2,000 works.[5] Reed’s works were taken up by several different Protestant denominations and translated into several languages. Her most popular hymn was “I Belong to the King” which was estimated by publishers Hall, Mack & Co. to have a circulation of four million copies.[6] Hymns were regularly sold for $1 during her time, yet Reed received “top price of $2” for some of her work.[7] In 1940, the American Society of Composers, Authors and Publishers recognized Reed’s “substantial contribution to American music” by awarding her a weekly “bonus.”[8]

In addition to hymns and songs, she also wrote poems, children’s stories, and books.[2] Her autobiography My Life Story was published in 1912.

Death and legacy
Reed died at the age of 85 in 1951. She is buried at Ebenezer Methodist Church at Arden.[3] Reed’s family homestead near Arden, West Virginia was listed on the National Register of Historic Places until 1991, when it was destroyed by fire.[9] 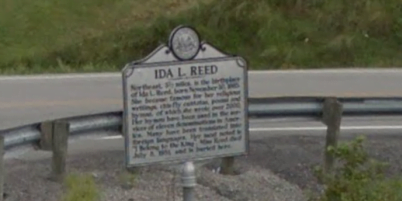