On September 14, 1898, John Nicholson, a travelling salesman (think of the Music Man era) from Janesville, checked into the Boscobel Central House Hotel. Back in the day, not all hotel rooms were private – in fact often you may not have a bed to yourself. In 1776, John Adams wrote of having to share a bed with Benjamin Franklin, and how they argued all night about whether to open the window or not.

Nicholson wasn’t as quarrelsome, but when he joined Samuel Hill of Beloit, he had a promise to keep to his dying mother.

He asked, “Mr. Hill, will you pardon me if I keep the light on just a little longer, because I always make it a practice to read from the Word of God and have a little chat with Him before I retire?”

Hill had a problem with Nicholson reading silently – you see, Hill was a Christian and so asked Nicholson to read aloud so he could benefit as well!

Nicholson read from John 15, and the men prayed and talked well past midnight.

On May 31, 1899, Nicholson and Hill met again in Beaver Dam. They realized that the travelling salesman life often resulted in getting drunk every night, and gambling thru every weekend, not to mention other temptations, and they talked again about what they could do to help fellow believing salesmen.

The future national secretary of the Gideons, C.T. Bowers, would say “There is scarcely a hotel in the country where the travelling men do not gamble over Sunday and during most of their spare time when they are in the town. This is one of the main evils that it is our object to cure. It is a bad influence over hundreds of well raised young men who start out on the road every year. The gambling evil among traveling men is the cause of many a suicide, and of many men being sent to the penitentiaries, since they have to steal from their employers to keep up with the pace set by the older men.”

On July 1, 1899, they announced a meeting of their “Christian Commercial Traveling Men’s Association” at the YMCA in Janesville, and the only person to show up was W.J. Knights of Wild Rose. But being salesmen, they were not discouraged, but called their small organization the Gideons, and decided to spread the word.

In September they met in Waukesha with several more joining, and in July 1900 they held their first annual convention in Waukegan, Illinois.

While the Gideons started in Wisconsin, the idea of placing a Bible in a hotel room arose in 1907 in Chicago, and became a national goal at the 1908 convention in Louisville.

As the organization grew, each state chapter would have its own convention. In 1911, the Dayton Herald reported that on May 21st, 25 area churches would have guest speakers who were Gideons, were in town for the state convention. Interestingly, the paper also reported on the Gideon Yell:

Say, my friend, have you seen

Judges seven, all read through

Tells exactly what we do.

Over 2 billion Bibles have been distributed worldwide thru the ministry of the Gideons.

The Boscobel Hotel is on the State & National Registers of Historic Places; built in 1863. At almost any hotel in the world you will find a Gideon Bible provided by Gideons International. The birthplace of the Gideons was the Central House Hotel on September 14, 1898. Traveling salesmen John H. Nicholson of Janesville, Wisconsin, and Samuel E. Hill of Beloit, Wisconsin, shared a room in the crowded hotel because of a lumbermans convention. In Room 19, the men discovered that they were both Christians; they talked about starting a Christian traveling mens association. The following May the two salesmen, joined by a third, William J. Knights, rekindled that idea, and on July 1, 1899, founded the Gideons. The name Gideon comes from the Old Testament Book of Judges, and refers to a man who was willing to do whatever God asked of him. Today, the Boscobel Hotel, where the two founders met, is listed on the National Historical Register, and Room 19, where the idea of the Gideons was conceived, is preserved and marked with a special plaque. For more information or restaurant hours call 608-375-4714. 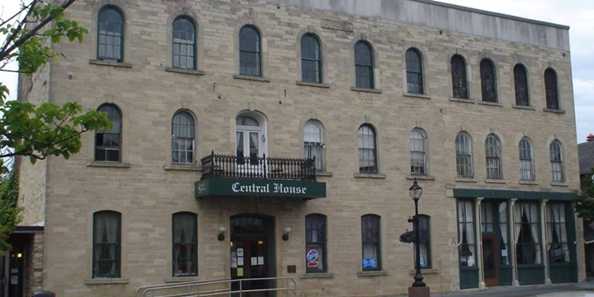