Home of the composer Joseph Philbrick Webster, who wrote the music for the song “In the Sweet By and By”

There’s a land that is fairer than day,
And by faith we can see it afar;
For the Father waits over the way
To prepare us a dwelling place there.

We shall sing on that beautiful shore
The melodious songs of the blessed;
And our spirits shall sorrow no more,
Not a sigh for the blessing of rest.

To our bountiful Father above,
We will offer our tribute of praise
For the glorious gift of His love
And the blessings that hallow our days.

The composition of the song is described as follows:

Mr. Webster, like many musicians, was of an exceedingly nervous and sensitive nature, and subject to periods of depression, in which he looked upon the dark side of all things in life. I had learned his peculiarities so well that on meeting him I could tell at a glance if he was melancholy, and had found that I could rouse him up by giving him a new song to work on.

He came into my place of business [in Elkhorn, Wisconsin], walked down to the stove, and turned his back on me without speaking. I was at my desk. Turning to him, I said, “Webster, what is the matter now?” “It’s no matter,” he replied, “it will be all right by and by.” The idea of the hymn came me like a flash of sunlight, and I replied, “The Sweet By and By! Why would not that make a good hymn?” “Maybe it would,” he said indifferently. Turning to my desk I penned the words of the hymn as fast as I could write. I handed the words to Webster. As he read his eyes kindled, and stepping to the desk he began writing the notes. Taking his violin, he played the melody and then jotted down the notes of the chorus. It was not over thirty minutes from the time I took my pen to write the words before two friends with Webster and myself were singing the hymn.—Sanford Fillmore Bennett (1836-1898)

The Racine Journal did a story on the composition of the hymn that is featured in the Wisconsin Historical Society. 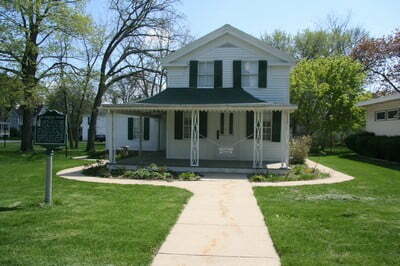