Blaine Myron Cedarholm was born on June 20, 1915. Myron Cedarholm, as he was called, was saved at the age of five. He was baptized at age ten by his father, who was also his pastor. By the end of his life, Cedarholm had come to be known as “the man with the pipeline to heaven.”

Cedarholm was raised in a wonderful home and knew at a young age that he was called to the ministry. He studied hard, prayed often, and preached weekly in churches everywhere.

In 1960, after he and his wife had served in ministry as a couple for thirteen years, they were given the opportunity of visiting missionaries around the world. The Cedarholms were able to visit at least 325 missionaries in 52 countries.

In May of 1968, Cedarholm received a phone call from a kind lady urging him to visit Watertown, Wisconsin. Because of her great respect for the Cedarholms, she felt he might be the right man to start a Bible college.

With less than 90 days until classes would be scheduled to begin, the project of starting a new college seemed impossible. God, however, is known for doing the impossible. In September of 1968, Maranatha Baptist Bible College opened its doors for its very first school year. 172 students from around the country attended this miracle school.

Mrs. Cedarholm wrote the school hymn, and its third verse reads as follows:
Maranatha: He cometh! Behold, in the sky
A shout! A voice the trump of God! Our Lord is drawing nigh!
Believe Him, receive Him, look up and thou shalt be
To the Praise of His glory with Him eternally!

The Cedarholms trusted God to do the impossible if it was His will for them to start a school. Do you believe that God can do the impossible in your life? Are you trusting in God to lead you and give you what you need to be what He wants you to be, whether that’s a teacher or a missionary worker or a college president…or whatever He may want you to be?

Ephesians 1:12 – That we who first trusted in Christ should be to the praise of His glory. 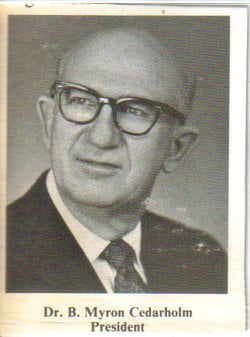