Rev. Warren D. Cornell was born in Michigan but left at 19 to teach and preach in Texas. At 23 he came to Wisconsin, where he’d spend the next 40 years of his life in pulpit ministry and civic service. He pastored in the greater Oshkosh area for awhile and 1889 found him as pastor of the Methodist Episcopal Church in Berlin, Wisconsin. He later founded an independent church in Fond du Lac, the same city where he’s also buried.

In the 19th century, Camp meetings were an opportunity for churches to come together for singing and fellowship, but primarily preaching the way of Salvation, with the Mourner’s Bench prominently at the front.

Rev. William G. Cooper was pastor of the Methodist Episcopal Church in West Bend, Wisconsin, he’d later go on to pastor several Baptist churches, but in 1889, his church in West Bend held their annual summer camp meeting from Wednesday night to Sunday night. According to the church historian, the families would gather at the farm of Francis Gansel, a Prussian immigrant to America, who became Town Chairman of West Bend.

We’re standing on the site of the original Francis Gansel farm where the camp meetings were held, although now it is the Bicentennial Park in West Bend.

Rev. Cornell came down from Ripon as a guest speaker at the camp meeting, and on Sunday, the last day of the camp meeting, took a walk down the Milwaukee River just a mile to our east, over by the church building.

Many hymns come from personal tragedy. This hymn however comes from a time of happiness, reminding us that the same God who sends times of sorrow also sends times of joy. Rev. Cornell was so filled with joy after five days of camp meeting spent fellowshipping and eating with believers, testimonies, singing, and preaching, that the words flowed out of the overabundance of his soul. According to a couple sources, as he walked, Rev. Cornell grabbed the back of an advertising flyer and penned these words along this river:

Far away in the depths of my spirit tonight

Rolls a melody sweeter than psalm;

In celestial strains it unceasingly falls

Coming down from the Father above!

Sweep over my spirit forever, I pray

In fathomless billows of love!

Rev. Cornell put the paper back in his pocket, and walked back to the campground for the evening service, surrounded by His Father’s love

Back here at the campground, after the evening service, the host pastor, Rev. Cooper, was cleaning up the grounds when he saw a paper lying on the floor. He read the words, and took the paper to the organ, and began composing a tune for the words. As he played on the organ, the words to another stanza began to form in his mind, this stanza an invitation to unbelievers to partake of this peace:

Ah soul, are you here without comfort and rest,

Marching down the rough pathway of time?

Coming down from the Father above!

Sweep over my spirit forever, I pray

In fathomless billows of love!

Three years later, in 1892, Rev. Cooper and his friend Robert McCabe published the hymn in their songbook, Pearls of Paradise, with the note, Dedicated to the M.E. Church, West Bend, Wisconsin, that hosted that camp meeting that gave birth to this beloved hymn, Wonderful Peace. 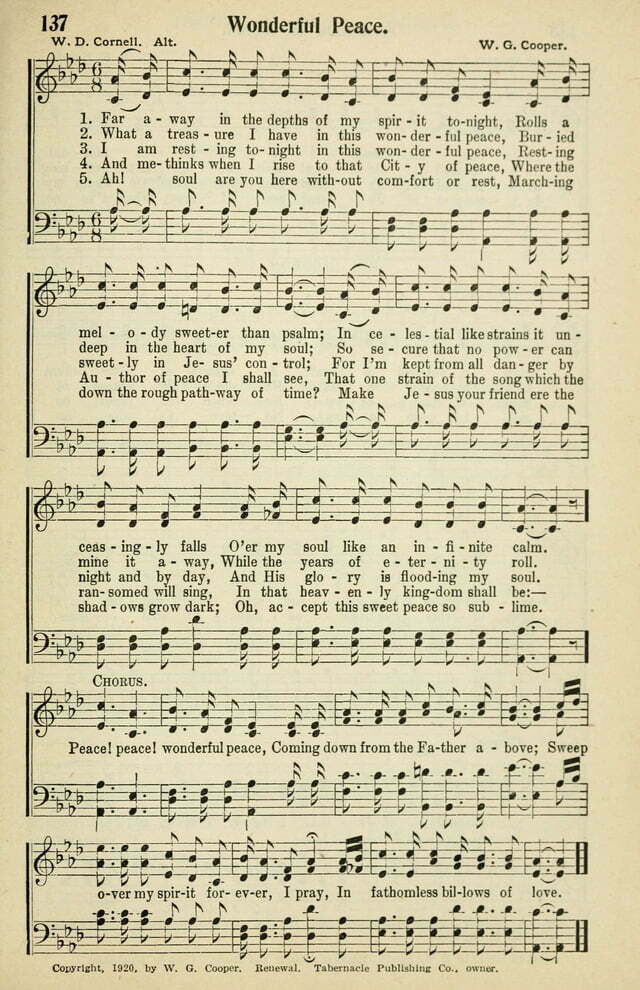