I left Wisconsin for a visit to Myanmar (ancient Burma), where throughout the entire country the legacy of Adoniram Judson (see Plymouth, MA) is visible. During my trip, I read the biography of Judson, To The Golden Shore. When it mentioned an individual with ties to Wisconsin, I had to learn more, and started digging thru the archives.

Over a hundred years ago, the Wisconsin Historical Society recorded the passing of James Delaney with a brief biography, but they left out his interaction with one of the most famous people in 19th century Church History.

James Delaney was born in Ireland, February 1, 1804. The newspapers report “he was designated by his parents to be a Catholic priest.”(Gazette1896) “But the death of his parents while he was yet a lad, left him a legacy of poverty, ignorance and superstition.” (Register1896) Following a financial panic in London that cost him his job at the age of 22,  “he entered the service of the East India company, and left his home in Ireland [with 224 other raw recruits] for Madras in 1826.” (Gazette1896)
He arrived after a six month voyage, and we’re told his “natural force of character and superior intelligence made him a leader among his comrades.” (MJ1896). Delaney was “soon promoted from the rank of private to that of artillery man.” After four years in India, he was transferred to the capitol of British Burma, Moulmein.
The British had captured several provinces of Burma a few years earlier, and needed the soldiers to maintain the peace.”
Around this time, something changed – the papers say he had a “wild and reckless disposition” – “at one time, for resenting a petty insult given him by a superior officer, he was court-martialed and condemned to lose his rank and also to receive 200 lashes on his back, but the latter part of the sentence was remitted.” It was a rough time in the life of James Delaney.
Eugenio Kincaid, a doctor’s son from Connecticut, had just arrived in Burma . While in college Kincaid heard a sermon by Luther Rice and was burdened for missions. He was rejected by the mission board and preached in the States for eight years until he was finally appointed by the mission board to go to Burma (Wikipedia)
Kincaid arrived in Moulmein – Adoniram Judson, one of the first Protestant missionaries sent from America was across the golf in Rangoon translating the Old Testament into Burmese. Kincaid was learning just to speak the difficult Burmese language, but until he was fluent in Burmese, he was still able to preach in English to the British soldiers in Moulmein.
Not all of Kincaid’s sermons were inside a church. Another soldier was insulted by an officer, and shot and wounded the officer. This soldier was sentenced to be hung. But before the hanging, Eugenio Kincaid preached, prayed, and sang the hymn, “When I Survey the Wondrous Cross.” The song touched a hardened 27 year old soldier named James Delaney. Delaney had been trying to to avoid this American missionary, but he decided to start attending some of the church services led by Kincaid.
We read that Delaney “read the Bible and Pilgrim’s Progress and prayed at night in the jungle.” Delaney was one of the hundred soldiers saved that year, and on March 23, 1831, he was baptized in the Salwin river of Burma. (Biblical Beginnings quoting Hymns Historically Famous)
His comrades thought his conversion was a joke, but once they realized it was real, they started attacking and threatening him. But as Proverbs 16:7 says, “When a man’s ways please the LORD, he maketh even his enemies to be at peace with him.”
Kincaid would move to Rangoon to take over the mission schools while Adoniram Judson moved to Moulmein, where Delaney was. Judson spent time with James Delaney, and encourage him to study, and helped him start his library.
In 1834, the Judsons even raised the $350 to buy his discharge from the British East India Company, and in November the Judsons sent him to the London Missionary Society and then to America to the Hamilton Theological Institute that Eugenio Kincaid had graduated from.
Delaney came to New York in 1835, and was there educated for the ministry. To help with tuition, Sarah Judson had sent him $25.
He preached many revival meetings across New York, including in Lake Champlain with another Baptist minister William Arthur. You might have heard of William’s son – President Chester Arthur. (wikipedia)
In 1838 he held his first baptism service in New York – 14 converts were immersed – when the temperature was 15 degrees below zero! (Whitewater)
Before he left New York, Delaney met his wife Tirzah and they were married in 1839.
In 1839, he came to Wisconsin – when there were just two Baptist churches in the whole state – (Baptist Encyclopedia), and immediately began organizing churches in the new Territory. He started churches in the new cities of Madison and Janesville, and was given the title “Exploring Agent” – general missionary to the entire state.
Looking back at this pioneering time, he would be described as “With a soul all aglow with earnest piety and missionary zeal, with a robust and powerful constitution, with untiring energy and a moral heroism that never failed him, many of his missionary journeys along the Wisconsin and the Mississippi, are as full of wild adventure, thrilling incident and heroic endurance, as those made by his revered friend and father, Mr. [Eugenio] Kincaid, along the Irrawaddy and the Saluen.”
In 1840, Wisconsin was still a territory with only 30,945 people – smaller than Menomonee Falls or West Bend. James Delaney’s small family was in the western part of Iowa/Lafayette County.
In 1841 his son Arthur was born, probably named after his dad’s preaching buddy William Arthur. Little Arthur would grow up to serve as a Wisconsin Assemblyman, Senator, and US Attorney for the Eastern District of Wisconsin. Little Arthur would lose a run for congress, but would leave Wisconsin to join the Klondike Gold Rush and serve as the first mayor of Juneau, Alaska! (Wikipedia) In 1845, Sarah Judson died, Sarah, who had helped fund his bible college training. That year, Delaney wrote the missionary report on Wisconsin for the American Baptist Convention from East Troy:
“There is an impression at the east, that the people in this region are ignorant and uncultivated, but it is a gross mistake. Generally speaking, there are no tter judges of preaching and preaching talent in the empire state than in Wisconsin, and if the preacher’s talents are not respectable they will soon be abandoned. Consequently, well qualified men are needed here as much as there, if not more so. Error here, as well as elsewhere possesses intelligence, talent, and energy. In every settlement, and in almost every form, it stands forth in bold array and mocks and defies the truth. Surely, then, ministers of suitable qualifications should occupy those places.” (AmBaptReport)
In 1846, Delany would assist in the forming of the Wisconsin Baptist State Convention, “founded upon a purely evangelical basis, and its one great object was to evangelize through the preaching of the gospel and the planting of churches, the great spiritual destitution in the territory of Wisconsin.” (Minutes WBC)
In 1849 he was pastoring for a year in Grafton.
In 1850, his mentor Adoniram Judson died and was buried at sea. Delaney was pastoring for a year in Waukesha – with some time in New York and Vermont
In 1855 he lived in Port Washington, in Ozaukee County.
By this time, his old pastor Eugenio Kincaid was made a special envoy from the King of Burma to the President of the United States, James Buchanan! Kincaid brought an ivory box with the royal letter to the president, and returned to Burma with gifts from the American president. (Wikipedia)
1860 – he lived in Hubbard, Dodge, WI with his wife Tirzah, and his three children Arthur, Mary, and Friedrich (Family Search).
However, the Civil War would soon break out. Delaney would be a chaplain during the War of Secession, in the 18th Regiment, Wisconsin Infantry, F&S (source)
In 1868, he moved to Whitewater where he would spend the rest of his life. The census records that in 1870 he was a Baptist clergyman living there with his wife Tirzah, daughter Mary, son Fred (source)
By 1872, there were 72 members of his church. (Minutes WI Baptist) They say “He labored the whole year with the church in Whitewater, with patience and filetiy, in darkness and in sunshine, cheerfully ‘enduring all things for the elect’s sake.’”
In 1875 he took over the church in East Troy – 22 members but an average Sunday School attendance of 53.
In 1880 – he was a widow, but still a pastor, and lived in Whitewater with his daughter Mary and son Alfred (source) (source2)
He would soon retire and the Rev. J.M. Coon would take over as pastor of the church in Whitewater, but Delaney would preach from time to time.
In 1886, when the town was just over 3,000 people, the Rev. Coon would built a new church building at 401 W Main St, just a few blocks from downtown Whitewater. (source) In 1908, the building was sold to the Norwegian Lutheran Church of Whitewater. (source)
In 1890 the census tells us Delaney was still living in Whitewater, where he died at his home on December 18, 1896, at the age of 93.
At his funeral Dr. Hodge, who was then pastor of the church Delaney started in Janesville closed his eulogy with these words:
“Servant of God, well done;
Rest from thy loved employ;
The battle fought, the victory won,
Enter thy Master’s joy.” (Register1896)
It’s rather fitting that this cemetery where Delaney is buried, is across the street from the only remaining Baptist church in Whitewater.
======================
January 3 1845 from Rev. James Delaney
“The field I occupy is very extensive – There is no vilalge within a circle of ten or twelve miles, but there are several growing settlements. I know of no Baptist minister between here and the Mississippi, on the one hand, and Lake Superior on the other. Immigration pours into the Territory, in one unbroken tide during the season of navigation. The unrivalled and far-famed excellence of the soil in this and some of the adjacent counties, draws multitudes with more than magnetic power. Generally speaking, their means are scanty; with some exceptions they are poor but energetic adventurers. A burning eagerness to “enter land,” drives them to expend nearly their all for lots of rich “prairie” and “oak openings!” The principal influx is in the fall, when it is too late in the season to provide an adequate defense against the approaching inclemencies of the winter, hence, miserable dwellings, wretched clothing and other demonstrations of privation and poverty meet the eye on every hand. By the stern necessity of the case, the settler is obliged to make an untiiring struggle for years – not to hoard wealth, or live in style, but to tame the wilderness and keep himself alive.
It is painful to add, that among the settlers here, are too many who were professors of religion “in the east,” and now have their “Letters of Commendation” in their chests;….
I have however, found many of the very “salt of the earth” here, but so poor that it would be a want of benevolence to expect them to give anything for the most benevolent purpose…. Often toil-worn and hungry, I travel scores of miles on foot and along,… and to visit the rich, poor, and the impenitent….
Baptist families are coming in and settling all around me, who need my daily attention. 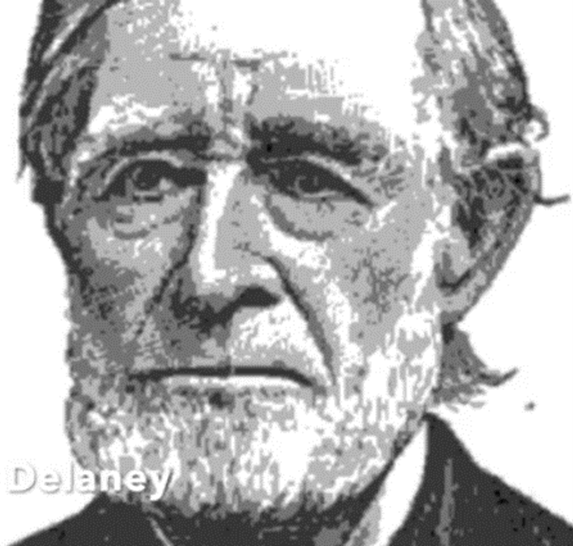