From 1860 to 1930, the Queen’s Royal Hotel was located on the shores of the Niagara River overlooking Lake Ontario. One of the top hotels of the Gilded Age, from 1883 to 1897 it became the permanent home of the Believers’ Meeting for Bible Study, later called the Niagara Bible Conference.

This prototype of the Bible Conference movement, began in 1876, as promoted by the Truth magazine, edited by James H. Brookes (1830-1897) of St. Louis.

B.B. Warfield said of Brookes, “Large in figure, commanding in carriage, fluent and forceful in speech, fired with intense convictions, infused with emotion, whether in pulpit or on platform his oratory not only caught the attention but dominated the feelings and controlled the convictions of his audience … [He had] the voice of a lion and the vehemence of an Elijah … His was no anemic Christianity.”

The conferences emphasized premillennial (the Return of Christ would introduce the Millennium, as opposed to postmillennialism –  mankind bringing in the Millennium) dispensational (God deals with mankind in different ways at different times, and has an eschatological role for national Israel) fundamentalism (holding to the infallibility of Scripture, as opposed to Modernism).

The 1878 Niagara Creed would lay the groundwork for future fundamentalist creeds, such as the Bob Jones University Creed.

The Niagara Bible Conference (officially called the “Believers’ Meeting for Bible Study”) was held annually from 1876 to 1897, with the exception of 1884. In the first few years it met in different resort locations around the United States. Starting in 1883, it was held in Niagara-on-the-Lake, Ontario at the Queen’s Royal Hotel and its pavilion.

The driving force behind the meeting was James H. Brookes, a Presbyterian minister from St. Louis. Brookes publicized the meeting through his magazine Truth, and devoted substantial space to summaries of the speeches. A typical example is his report from 1892, which describes the meeting as

“more largely attended than ever before. Often every seat in the pavilion was occupied, and the porches were filled with eager hearers of the Word. The place too becomes more beautiful as the years go by, and it would be difficult to find a spot better suited”[1] to the quiet and prayerful study of the Sacred Scriptures. The building in which the Conference meets, overlooking Lake Ontario and the River Niagara, and surrounded by green trees, is secluded from the noise of the world; and so excellent were the arrangements for the accommodation of the guests, both in Queen’s Royal Hotel and in the boarding houses of the village, that not a word of complaint was heard from any one.“[2]

Most of the speakers were dispensationalists, and the Niagara Conference introduced many evangelical Protestants to dispensationalist teaching. The messages generally centered on the doctrines of Christ, the Holy Spirit, the Bible, missions and prophecy. Premillennialism and dispensationalism was defended and taught.[3] Most of the leading dispensationalsts of the late 19th and early 20th century attended the conference regularly, including William Eugene Blackstone, Charles Erdman, James H. Brookes, William Moorehead, Adoniram Judson Gordon, Amzi Dixon, C.I. Scofield, and James Hudson Taylor (who founded the China Inland Mission).[citation needed]

In 1878, the Believers’ Meeting for Bible Study produced the document that came to be known as the “Niagara Creed.” This 14-point statement of faith was one of the first to explicitly proclaim faith in the premillennial return of Jesus Christ to earth. The Niagara Creed does not explicitly affirm dispensationalism, but it refers to several key dispensationalist beliefs, including the reality of the millennium, the restoration of Israel, and the distinction between the judgment of the saved and the damned.[citation needed]

In 1927, the Queen’s Royal Hotel was slowly closed down with the dismantling of many of the room’s furnishings. The last of the items from the hotel were auctioned off in 1935.  All manner of items from outside shutters, window frames, doors, tables, chairs right down to the dishes were sold.  Many a home in NOTL today might have remnants or furnishings from this magnificent hotel.

Years later town council decided this site should become a place for all people to enjoy. Today we have the lovely Queen’s Royal Park at King and Front Streets. The gazebo is a major draw for tourists and the views from it include Fort Niagara across the river in the United States and on a clear day, Toronto across Lake Ontario. 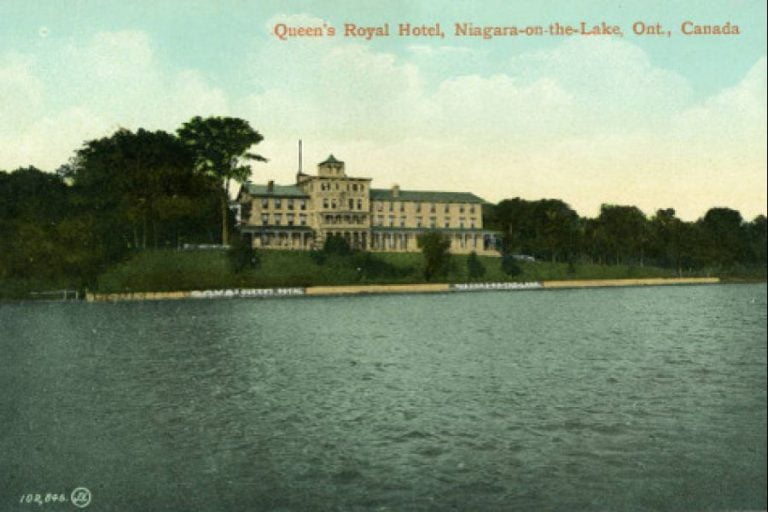