Born in Kellyville, Texas, Stuart Hamblen made his way to Hollywood. A “singing cowboy” – he wrote the hit song “I won’t go hunting Jake (but I’ll go chasing women)” that placed #3 in the US for 1950. At Billy Graham’s 1949 Los Angeles Crusade, the “original juvenile delinquent” and alcoholic was converted, quit doing alcohol commercials, gambling, and horse racing. The top radio host in Los Angeles, his conversion increased interest in the Graham Crusades. Because of his conversion, when he refused to do beer commercials, he was fired from the radio station. Talking with John Wayne, Hamblen noted “It is no secret what the Lord can do.” Following encouragement from John Wayne, Hamblen wrote the song that would break the top 10 in 1951.

James Henry Hamblen was a Texan farmer called to preach. A circuit riding preacher, he ended up pastoring at the First United Methodist Church of Abilene, Texas.

Despite his prayers, his son Stuart Hamblen was still unconverted. Stuart was the first radio “singing cowboy.” He became incredibly popular as a radio host, composer, movie actor, and recording artist.

Meanwhile J.H. Hamblen was having problems with the denomination. Modernism (denial of the inerrancy of Scripture, Creation, the vicarious atonement, historicity of miracles, and other cardinal doctrines) was slipping into the curriculum. Hamblen took a “sabbatical” and began a house church (like Boston’s Obadiah Holmes three centuries earlier). Hamblen would resign after 40 years of Methodist ministry, stating,

“I could not conscientiously remain in a church where modernism predominated and where the leaders did not believe in and uphold the Articles of Religion of Methodism; where the Sunday School literature was filled with doubt of the inspiration of the Bible and the fundamental doctrines of evangelical Christianity; where the young preachers trained in our Methodist Divinity Schools no longer believed the cardinal doctrines of our church.”

Leaving the United Methodist Church meant leaving his church, his salary, and his pension. The controversy grew, and others joined the new Evangelical Methodist Church on May 9, 1946. In a tract he outlined the danger of staying within the old church.

Shall I be loyal to this Church, pay my tithes that GOD has put in my hands for His Glory, to the following:

If I help put such a program over by my gifts or my membership, I am partaker and sharer of the sin.

Meanwhile his son Stuart was in Los Angeles, beloved radio host, but struggling. Alcohol was his comfort, and led him to spend many nights in jail, bailed out by radio listeners. His last hit was “I won’t go hunting with you Jake, but I’ll go chasing women with you.”

In 1949, Billy Graham came to Los Angeles for a tent revival. Henrietta Mears hosted the Hollywood Christian Group and invited Graham to speak. His wife Suzy took Henrietta aside leaving Graham alone with Stuart. Stuart invited Graham on his show to talk about the crusade, and closed, “Make sure you all come, cause I’ll be there too!”

When the time for the crusade came and Stuart was ready to retire, Suzy told him, “You ready to go? You told everyone that you were going to be there. You don’t want to disappoint your fans!” Stuart sat in the front row.

The message kept Stuart awake all night. At 4:30 AM a phone call came to Graham at the Langham Hotel near Wilshire Boulevard.

In a voice broken by tears, a man begged to see me right away. It was Stuart Hamblen… [Later] Stuart and his praying, godly, wife, Suzy, were at my door. We talked together and prayed, and the rugged cowboy gave his life to Christ in a childlike act of faith.

Stuart called his dad from Graham’s hotel room, and Graham could hear J.H. shouting over the phone! Stuart stopped the drinking and gambling. His neighbor, John Wayne, asked him, “What’s this I hear – you got religion?”

Stuart said “It is no secret what God can do in a man’s life.”

Wayne said, “That sounds like a song.” And Stuart wrote:

The chimes of time ring out the news
Another day is through
Someone slipped and fell
Was that someone you?

You may have longed for added strength
Your courage to renew
Do not be disheartened
For I have news to you.

Stuart continued as a national radio broadcaster, and when required to do a “live read” for alcohol, Stuart refused. Because the sponsors paid for the show, the show was cancelled.

On March 8, 1989, Stuart Hamblen died, and Graham preached the funeral. 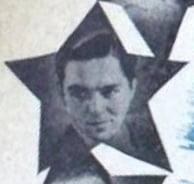