Thomas Hooker was born in Leicestershire, England, and graduated from Cambridge with a Master’s in 1611, the year the translators produced the Authorized (King James) Bible.

Hooker pastored in Surrey starting in 1620, and then in Chelmsford in 1626. But in 1629, because of his Puritan sympathies he was forced to flee to Rotterdam, and then in 1633, following the Pilgrims a decade earlier, he sailed to Plymouth, and then made his way to modern Cambridge, Massachusetts.

Hooker disagreed with the Massachusetts state church model. In Massachusetts, Puritan church membership was a prerequisite for voting. This combination of church and state would lead to problems like the “Half-way Covenant” of Jonathan Edwards’ day.

On May 1, 1636, Hooker led around 100 followers out of Massachusetts. The Thomas Hooker Trail has a marker in Grafton, Massachusetts, to mark this event:

Crossing the highway at this point is the Indian trail followed by the Reverend Thomas Hooker in 1636 when, with his invalid wife borne on a litter, he led a company of Massachusetts settlers to found Hartford, Connecticut.

In June they arrived, and founded a new colony of Connecticut, with the party declaring their new town, Hartford.

In downtown Hartford’s Travelers Plaza, named for Travelers Insurance Group, is the statue of the Hooker Family, “The Safe Arrival” with the following excerpt from the monument:

Their deeply religious principles found expression in the emblem and motto of the seal which the colony soon adopted. The seal of the State of Connecticut still bears the transplanted grapevines and the legend, “Qui Transtulit Sustinet.”

On the base of the monument, below the phrase “The Safe Arrival,” is the English translation of the Latin state motto of Connecticut,

“He who brought us here sustains us still”

The modern bridge over the Connecticut River is designated the Founders Bridge in their honor.

Almost immediately the band of pilgrims built a small log structure for their church. Four years later in 1620, that became Rev. Hooker’s barn, and a new church building would be built.

Other groups of Adventurers would soon leave Massachusetts as well to join Thomas Hooker for a journey “through the wilderness” as 17th century rural Massachusetts was viewed. A memorial to this second group is located on the southwest side of Hartford’s City Hall.

A legal dispute resulted in the colony being required to develop its own legal system. As the residents of Connecticut gathered, they asked Rev. Hooker to open the meetings.

On May 31, 1638, Hooker entered the little church building they had built and named First Church of Hartford, Connecticut, and lectured on the nature of government from Deuteronomy 1:13: Take you wise men, and understanding, and known among your tribes, and I will make them rulers over you.

1: The choice of public magistrates belongs unto the people by God’s own allowance

3: Those who have power to appoint officers and magistrates have it in their power also to set the bounds and limits of the power and places unto which they call them.

A statue of Hooker is at the site of the original church, now the Old State House.

On January 14/24 (OS/NS) 1639, the town members of the colony approved The Fundamental Orders Of Connecticut. “The first written constitution known to history that created a government.” expanding upon the self-government of the Mayflower Compact.

Bill Federer points out this was a massive change in government. Instead of flowing top-down by the “divine right of kings,” this government was bottom-up, as clearly stated in the title Hooker chose for his sermon, “The Foundation of Authority is Laid In the Free Consent of the People.”

These facts are memorialized in a separate monument at the Old State House, where the sermon was given. Almost 200 years later, Alexis de Tocqueville would visit this spot as he surveyed America for his book, Democracy in America.

Thomas Hooker
1586 – 1647
Founder of Hartford
Pastor – Statesman
[ east side ]
Leading his people through
the wilderness, he founded
Hartford in June 1636.
On this site he preached
the sermon which inspired
the fundamental orders.
It was the first written
constitution that created
a government.
[ west side ]
“The foundation of authority
is laid firstly in the free
consent of the people” 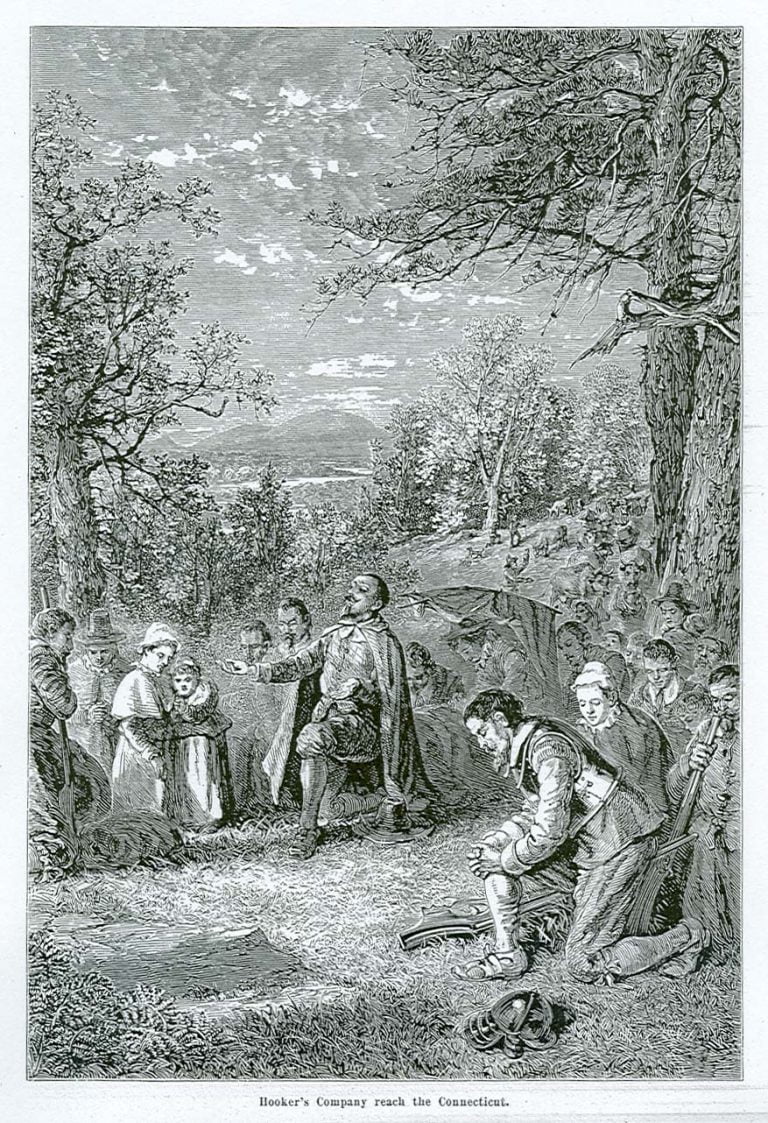 0.14 miles
No Reviews
Favorite
Thomas Hooker (see his statue nearby) would continue to minister until his death in 1647. He was buried in the “Ancient Burying Ground” near the original site of the church. In 1739, First Church would move to its current spot, adjacent the Ancient Burying Ground, where it is now known as Center Church. The marker by his grave reads: Thomas Read more...
View all