Carry Nation (1846-1911) was born in Kentucky and later married to Charles Gloyd. A doctor and an alcoholic, they had one daughter, a dissolving marriage, and a dead husband in less than two years. The first hand experience with liquor would change her life dramatically.

In 1894, she led her branch of the Women’s Christian Temperance Union into a local ‘pharmacy’ where they burned the stash of whiskey.

The next morning I was awakened by a voice which seemed to me speaking in my heart, these words, “GO TO KIOWA,” and my hands were lifted and thrown down and the words, “I’LL STAND BY YOU.” The words, “Go to Kiowa,” were spoken in a murmuring, musical tone, low and soft, but “I’ll stand by you,” was very clear, positive and emphatic. I was impressed with a great inspiration, the interpretation was very plain, it was this: “Take something in your hands, and throw at these places in Kiowa and smash them.”

When the governor refused to enforce the prohibition laws on the books, she began attacking the saloons in Topeka, the state capital.

Her second husband, David, suggested she use a hatchet next time for more effectiveness.

Proverbs 20:1 warns us that Wine is a mocker, strong drink is raging: and whosoever is deceived thereby is not wise.

In this era, America was seeing Proverbs 23:21 fulfilled, For the drunkard and the glutton shall come to poverty: and drowsiness shall clothe a man with rags.

Wives (like Carry) and children bore the result of their husbands’ drunkenness – both through lack of provisions, and through domestic violence. The churches led the effort to address this tragedy. Billy Sunday and William Jennings Bryan led the fight for Prohibition, which became the 18th Amendment to the Constitution in 1919.

According to the Mark Moore’s analysis in the New York Times, “Alcohol consumption declined dramatically during Prohibition. Cirrhosis death rates for men were 29.5 per 100,000 in 1911 and 10.7 in 1929. Admissions to state mental hospitals for alcoholic psychosis declined from 10.1 per 100,000 in 1919 to 4.7 in 1928. Arrests for public drunkennness and disorderly conduct declined 50 percent between 1916 and 1922. For the population as a whole, the best estimates are that consumption of alcohol declined by 30 percent to 50 percent.”

Despite the extreme work of Nation, and the advocacy of Sunday and Bryan, in 1933 America repealed Prohibition with the 21st Amendment. The ‘social gospel’ failed, but The Gospel “shall not return unto Me void.”

Carry is buried in Missouri

Her home in Medicine Lodge, Kansas, the Carrie Nation House, was bought by the Woman’s Christian Temperance Union in the 1950s and was declared a U.S. National Historic Landmark in 1976. A spring just across the street from Hatchet Hall in Eureka Springs is named after her.

This marks the home in Medicine Lodge of
Mrs. Carry A. Nation
who did outstanding work as a temperance crusader in Kansas.
Born Nov. 25, 1846.
Died June 9, 1911 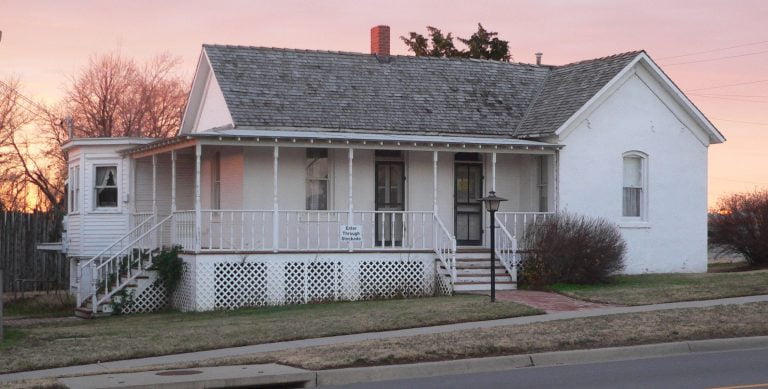