During his 40-year ministry, Peck contributed to the establishment of 900 Baptist churches, saw 600 pastors ordained and 32,000 were added to the Baptist faith. He died in Rock Springs, Illinois, where he was first buried. His body was reinterred at Bellefontaine Cemetery, St. Louis.[8]

John Mason Peck was originally buried beside his beloved wife Sarah in 1858, 29 days later his body was removed to be re-interred with other Pioneer Baptist Ministers in the Bellefontaine Cemetery in St Louis, Missouri.

These other Baptists include:

From the historical marker in Illinois:

John Mason Peck (1789-1858), pioneer Baptist preacher, author, and educator, established the school which became Shurtleff College. In 1817, Peck had left his home in New England with a vision “to bring the lamp of learning and the light of the gospel” into the undeveloped West. He, his wife Sally, and three children endured an arduous four month trip in a small one-horse wagon, setting in Rock Spring, near O’Fallon, Illinois.

There, in 1827, Peck founded Rock Spring Seminary, the first institution of its kind in the State of Illinois. In 1831, the seminary was moved to the growing city of Alton, where, in 1836, the name was changed to Shurtleff College, recognizing the gift of $10,000 from Dr. Benjamin Shurtleff of Boston.

John Mason Peck is well described as a missionary and a teacher, an author and an editor, a geographer and a cartographer, and a promoter of churches, schools, and western settlement. For thirty years, he was undoubtedly one of the strongest advocates of education and righteousness in the entire Mississippi Valley. He traveled hundreds of miles by horseback or wagon, often under most difficult circumstances, while his wife and children bore his long absences with fortitude.

Peck was one of the foremost ministerial opponents of slavery in Illinois and provided great support to Governor Edward Coles’ successful anti-slavery effort in 1824. In 1851, he was honored with a Doctor of Divinity degree from Harvard University. He died on March 16, 1858, and is buried in Bellefontaine Cemetery in St. Louis. 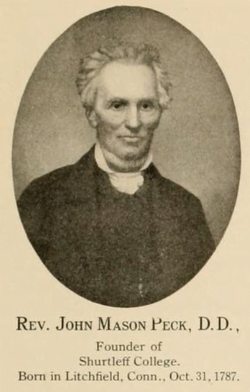 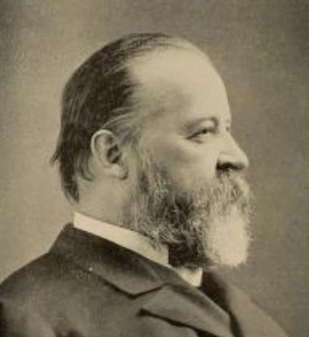 0.41 miles
No Reviews
Favorite
A Presbyterian pastor with Presbyterian pastor ancestors, he was a pastor in St. Louis for 32 years. A friend of D.L. Moody and a mentor to Charles Scofield, Brookes led the premillenial dispensational movement thru the Niagara Bible Conferences.   The Brookes Bible Institute nearby is named in his honor. The Bellefontaine Cemetery is one of the few to have Read more...
View all