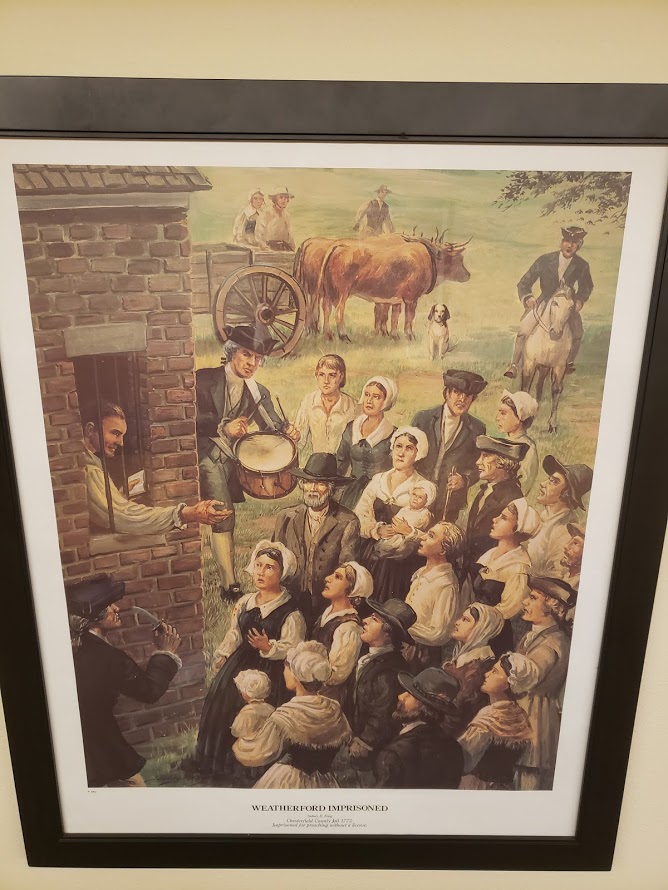 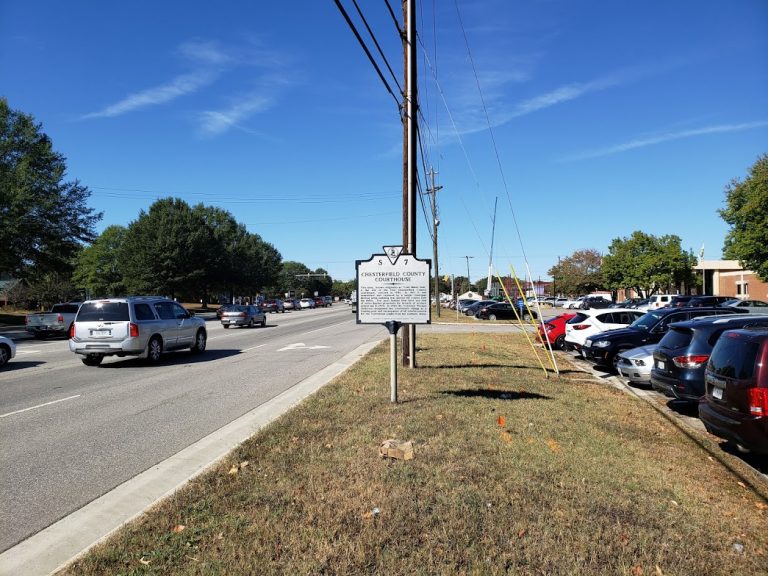 The Chesterfield County Museum, at 6813 Mimms Loop, is a replica of the 1749 courthouse where magistrates, during 1770-74, sentenced seven Baptist preachers to jail for preaching Christ without state-church approval. Where the jail once stood, there now stands the Religious Freedom Monument, a grantie memorial with a bronze tablet inscribed to the memory of those Baptist preachers. See the section, “Virginia Baptist Preachers Imprisoned in Chesterfield Jail 1770-74,” in Chapter 15.

“Whether it be right in the sight of God
to hearken unto you more than unto God, judge me,
for we cannot but speak the things
which we have seen and heard.” Acts IV:19-20

In addition to being an elected official, Patrick Henry was a successful lawyer – by 1767 he had over 500 clients paying for his services. Some clients he did more for than even pro bono legal representation.

Henry, an Anglican vestryman and member of the Anglican elite, must have been moved by the preaching he heard from the dissenter New Light Samuel Davies of Pole Green Church in Mechanicsburg. Davies used his rights as an English subject to seek a license to preach from the Anglican authorities, but other non-conforming ministers felt their license to preach came from Matthew 28:19-20 (Go ye therefore, and teach all nations, baptizing them in the name of the Father, and of the Son, and of the Holy Ghost: Teaching them to observe all things whatsoever I have commanded you: and, lo, I am with you always, even unto the end of the world. Amen.), not from an ecclesiastical-political machine.

In 1773, John Weatherford was a 33-year-old Baptist preacher and Virginia native. Baptists were new to Virginia (barely a dozen years) but exploding. Anglicans, on the other hand, reached their sesquicentennial before the first Baptist church began. In just a few months there would be over fifty Baptist churches in Virginia. Baptism would split Weatherford and his fellow preachers from the Anglican elite.

He declared that their pedobaptism (baptism as an infant) was insufficient and ineffective, and that they had to be rebaptized (anabaptist, baptized again), following their profession, or credobaptism (baptism by belief). Telling the cultural elites of his day that their initiation certificates to the state church were void wasn’t a way to win friends and influence people.

Yet it was resounding with the common people.

The rulers of the Episcopal Church were much vexed at the success of Mr. W. Wherever he went, his ministry was attended by crowds and many were converted through his instrumentality. It was a source of great mortification that a plain man, without any pretensions to learning, should so far obtain the confidence of the people. (James Taylor’s Virginia Baptist Ministers, p. 51-53)

John Weatherford was arrested on May 15, 1773 here in Chesterfield County for “preaching and assembling the people together without having any License for so doing.” (Lewis Little’s Imprisoned Preachers and Religious Liberty in Virginia, 335-336).

Weatherford was fined and incarcerated until his fine was paid. Not having money to pay the fine (and being in jail he could not earn the money to pay the fine) he was seemingly stuck. Sadly this wasn’t unusual. At one point there were 44 Baptist preachers held in jails across Virginia at the same time!

Weatherford’s congregation would come on Sundays to the village jail. He would lift the window of his cell and shake hands through the bars. Then he would preach and often gesture through the bars.

Yet even in prison he was not unmolested. Ruffians were on either side of the window with knives, so that when he reached his arm through the bars:

they would slash his hands… until… it was said his hand would stream with blood as he spoke, and sometimes in his gesticulations, forgetful of the wounds, he would scatter his blood on his hearers or on the ground. (John Prestridge’s Modern Baptist Heroes and Martyrs, 322).

Dr. William Hatcher was telling this account in a church in Virginia in 1872, when “a stocky old gentleman with white hair and a strong face came to his feet…. Dr. Wm. White, an eminent physician of that community.”

Mr. John Wetherford, so graphically described by the speaker tonight, settled just eight miles from this place after the Revolutionary War…. One morning I noticed that my father, dressed with unwonted care, was about to set off for a journey on horseback. When I asked him where he was going, he said with great seriousness, he was going to attend the funeral of the Rev. John Wetherford, one of the greatest preachers he had ever known. To my grateful surprise he consented that I might go with him…. My astonishment knew no bounds when I reached the home of the old preacher. Never had I seen such an array of horses, carriages, wagons, and other vehicles as fairly covered the earth…. After the funeral exercises were concluded we were told that those who desired to do so would be allowed to take a last look at the dead. It was a moment of awe to me, for I had not seen the face of the dead before. I clasped tightly my father’s hand and followed him as the line filed by the coffin. I was barely tall enough to look into the coffin. The hands of the veteran minister lay ungloved upon his breast with palms downward. I noticed the stiff and bloodless look they had and saw white and rigid seams extending across the back of each hand. The fact impressed me at the time, but I kept silence, and a thousand times I dare say I recalled those singular marks on the hands of the dead preacher…. I thank my brother for bringing me tonight …. a solution of a perplexity which for full sixty years has troubled my mind. They were the marks of the Lord Jesus – martyr marks of God’s hero.” (Prestridge, 322-324).

Weatherford had been in jail for five long months. Patrick Henry heard of the preacher’s situation and took his case at no charge. The release was ordered, but the jailer wouldn’t release the prisoner until he paid up. Weatherford was nothing if not stubborn and continued to refuse to pay. Miraculously an anonymous donor stepped forward and paid the sum. Any guesses who the anonymous donor was? Patrick Henry.

The jail in Chesterfield County, Virginia confined seven Baptist preachers for preaching the gospel of the grace of God without state church ordination or state license. Robert Baylor Semple tells us that Chesterfield County “kept up their persecution after other counties had laid it aside.”

John Weatherford was born in Charlotte County, Virginia in 1743 and entered the Baptist ministry in 1761. Wherever he went great crowds attended his preaching. This stirred up the jealously and wrath of the established clergy, and he was apprehended and arrested by Colonel Archibald Cary, May 15, 1773 for convening numbers of people and praching to them, “not being qualified by law so to do, which is contrary to law and tends to disturb the peace and good government of this colony.”

The event portrayed in this painting is of John Weatherford preaching through the grates of the window of Chesterfield County jail. You will notice a man stationed to the side of the window slashing his hands as he continued his demonstrative preaching sprinkling his startled listeners with his blood. He carried the white scars when his hands were folded across his breast in death on January 23, 1833. One who observed them later called them “the marks of the Lord Jesus – martyr marks of God’s hero.”

Notice also the drummer pounding away on his drum, and a horseman approaching to ride through the people peaceably assembled to hear God’s word. These were common practices to disturb the peace of those accused of disturbing the peace. Ultimately a wall was consructed to prevent the preachers from noticing when their congregations assembled. They then leaped upon the wall and said, “Preach on Preacher,” until glass and other sharp objects were placed there to discourage this, at which time a stick and handerkerchief became their preaching banners.

The preaching was fruitful, conversions multiplied, baptisms followed, strong churches were established and more men were called of God to preach the gospel. Patrick Henry befriended Weatherford as well as other Baptist preachers in Virginia. He defended them in court, relieved their sufferings in prison, paid their fines and secured their freedom.

God preserve the memory of godly Baptist preachers such as John Weatherford and courageous statesmen such as Patrick Henry, who sacrificed so much to establish religious liberty throughout the land. 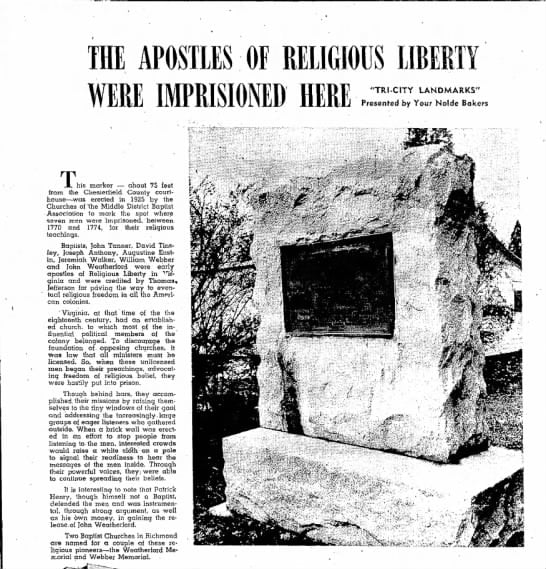 0.12 miles
No Reviews
Favorite
The Chesterfield County Museum, at 6813 Mimms Loop, is a replica of the 1749 courthouse where magistrates, during 1770-74, sentenced seven Baptist preachers to jail for preaching Christ without state-church approval. See the section, “Virginia Baptist Preachers Imprisoned in Chesterfield Jail 1770-74,” in Chapter 15. copyrighted and used by permission from David Beale, Baptist History in England and America: Personalities, Positions, Read more... 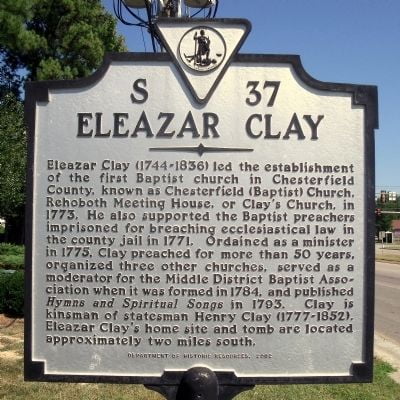 6.92 miles
No Reviews
Favorite
From Marker:   Eleazar Clay (1744-1836) led the establishment of the first Baptist church in Chesterfield County, known as Chesterfield (Baptist) Church, Rehoboth Meeting House, or Clay’s Church, in 1773. He also supported the Baptist preachers imprisoned for breaching ecclesiastical law in the county jail in 1771. Ordained as a minister in 1775, Clay preached for more than 50 years, Read more...
View all