In the morning of November 20, 1839, John Williams prepared to land on the island of Erromango. In his Bible was later found a small scrap of paper upon which he had written this text from the lips of the Lord Jesus, “I have prayed for thee, that thy faith fail not.” This petition was gloriously answered on that bloody day, and the faith of John Williams did not fail. He was brutally beaten with a war club, and his corpse was dragged into the dense vegetation to be cooked and eaten. The grief-stricken native workers, the faithful fellow-laborers of John Williams, watched the entire ordeal from the boat. They were the ones who had to tell Mrs. Williams the sad news. She took it with grace and Christian fortitude. Her eldest son, John, continued his father’s work in Samoa. Samuel, the little boy left in England, also became a messenger of the Prince of Peace. He carried the middle name, Tamatoa, the name of the Island King who first welcomed his father to Raiatea.

The life of the Reverend John Williams (1796–1839) is one of the more remarkable stories of the European colonisation of the Pacific. The most celebrated missionary of his age, the ‘Apostle of the South Seas’ was to be much mourned after his dramatic death in 1839 on the beach at Erromango in Vanuatu, and for his cannibalisation. It seems Williams and a colleague were killed in retribution for a murderous attack by sandalwood collectors who had earlier plundered the Eromangan’s food and pigs and killed them indiscriminately. The drama of his murder is captured here by his friend George Baxter (1804–1867), the popular English book illustrator who became well known for his work with John Snow, the publisher of the London Missionary Society (LMS). Famously, Baxter developed a process to produce colour prints from blocks and plates using oil-based inks. It was his aim to make available for sale good, inexpensive prints which would imitate oil painting. He believed, ‘that while their artistic beauty may procure for them a place in the Royal palaces throughout Europe, the prices at which they are retailed introduces them to the humblest cottages’.  Baxter’s prints illustrated Williams’ A Narrative of Missionary Enterprises in the South Seas but, sadly, Baxter’s Patent Oil Printing was not economically viable. Baxter was declared bankrupt in 1865 and died as a result of injuries acquired in an omnibus accident in January 1867. Collector Rex Nan Kivell was fascinated with Baxter’s coloured prints and what they revealed of European exploration of the Pacific and avidly collected them. He also assisted other collectors to do so as well. There are four versions of the famous print illustrated above, in Nan Kivell’s collection.

John Williams of the London Missionary Society and a colleague were killed at Dillons Bay in 1839. In November 2009, after a lengthy collaboration between the Museum of Anthropology at the University of British Columbia, the Presbyterian church of Vanuatu and the Vanuatu Cultural Centre, Williams’ descendants travelled to Erromango to reconcile with the descendants of those who killed their ancestor, the Uswo-Natgo clan, 170 years earlier.[20] To mark the occasion, Dillons Bay was symbolically renamed Williams Bay.[21][22]

The Rev. George Nicol Gordon, of Prince Edward Island, Canada and his wife, Ellen Catherine Powell, missionaries from the Presbyterian Church of Nova Scotia to the New Hebrides, were killed at Dillons Bay on May 20, 1861. A memoir of the couple appeared in book form, at Halifax, Nova Scotia in 1863.[23]

In total, six missionaries were killed on Erromango.[24] An oral history from Unpogkor (Dillons Bay) says Rev. Williams was killed because he disrespected an important kastom ceremony that was taking place when he landed.[25]

As Williams was the first Christian martyr in the south Pacific, Erromango became a particular focus for missionisation.[26] Canadian Presbyterian missionary H.A. Robertson, resident on Erromango from 1872-1913, succeeded in missionising the island’s population. This changed the traditional society of the island. His attempts at missionisation were effective because he carefully studied the beliefs and material culture in order to target the most powerful symbols of traditional society. He collected many objects and sent them to overseas museums or used them as curios in his overseas fundraising tours to demonstrate the ‘backwardness’ of Erromangans.[27]

In 1902, Robertson published Erromanga: the Martyr Isle, his description of his life as a missionary on the island. It was the first popular account[28] of Erromango and its people. It promoted to a global audience the idea that Erromango was the ‘Martyr’s Island’.[29] 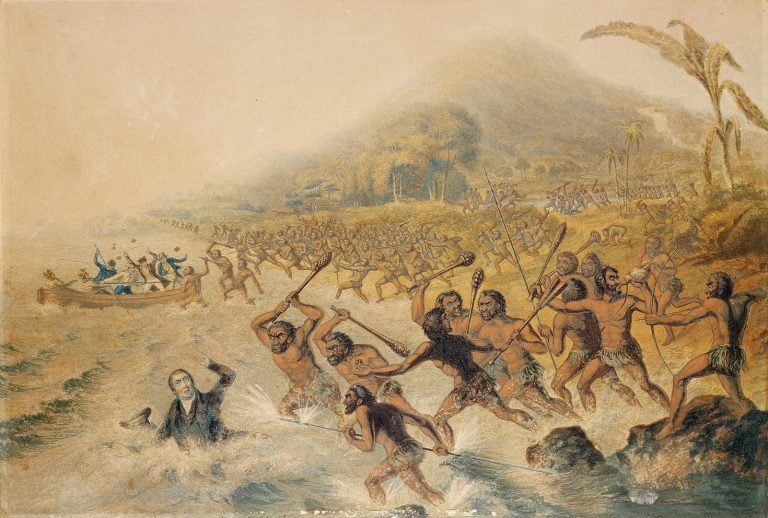