In 1857, the California gold rush was in decline. The railroad bubble peaked in July. Business failures began in August.

The fashionable churches were moving north, but Jeremiah Lanphier lived in the nonreligious lower part of the city. Lanphier never married, and had no formal schooling to prepare him for ministry, but he was commissioned as a lay missionary of North Dutch Church (torn down in 1860s)

He found his ministry in prayer, and started a prayer meeting on Wednesday, September 23, 1857 at the Fulton Street entrance to the church.

Nobody showed at noon, so he prayed by himself. By the end of the hour there were five others. Next week there were 20, and 40 the week after that. By October the meetings were daily, and by the end of March over ten thousand were meeting for prayer meetings on a daily basis. Even ships approaching New York were hit with conviction before they could land. Over one million were born again in two years. D.L. Moody was already saved but motivated by the spirit of prayer in the revival.

On the 150th anniversary, a statue was commissioned for outside the American Bible Society, and in 2015 it was moved to The King’s College.

From The King’s College:

NEW YORK CITY – May 29, 2015 – Visitors to the King’s campus on Broadway in lower Manhattan will notice a new addition to the lobby: Jeremiah Lanphier, as represented in the sculpture “Invitation to Pray.”

The statue may be familiar. For the past eight years, it resided outside the headquarters of The American Bible Society, near Columbus Circle in upper Manhattan. The Society recently relocated to Philadelphia, but as a result of the generosity of board members John Beckett and Rich and Helen DeVos, the statue found a new home in the King’s lobby.

Lanphier was a New York City businessman living during a tumultuous time in the history of New York City and the United States. Economic depression and political division over the issue of slavery marked America’s public life. In New York City, whose population was 800,000, 30,000 men lingered idle and drunk in the streets, and unemployment plagued the city.

Lanphier’s church had relocated north from the corner of Fulton and William Streets, and knocking on doors and sharing the gospel had made little difference in Lanphier’s mission efforts. Eventually, he realized the need for prayer, and began distributing thousands of flyers advertising a prayer meeting at noon in a church on Fulton Street, to be held on September 23, 1857.

For the first half hour of the meeting, no one came. Then five people arrived, and they prayed together. From Jeremiah’s flyers and by word of mouth, the invitation spread.

In a matter of weeks, thousands were gathering to pray in New York each week. From there, prayer meetings spread across the United States, and eventually, as many as 10,000 people per week were professing faith in Christ in New York City alone.

Sculptor Lincoln Fox was commissioned to create this sculpture of Jeremiah Lanphier in honor of the 150th anniversary of the Fulton Street Revival. The sculpture—now back downtown, near the church where the revival began—shows him seated on a park bench, Bible in hand, inviting passersby to come pray with him.

As Jeremiah Lanphier was the willing agent of revival in the heart of New York City, so The King’s College hopes to testify to the truth and hope of Christ, from the city streets to the halls of our culture’s greatest institutions. The College invites visitors to pause with Jeremiah for a moment and pray that our world would recognize its need, that Jesus’ name would be glorified, and that the world’s good would come through the work of The King’s College in New York City. 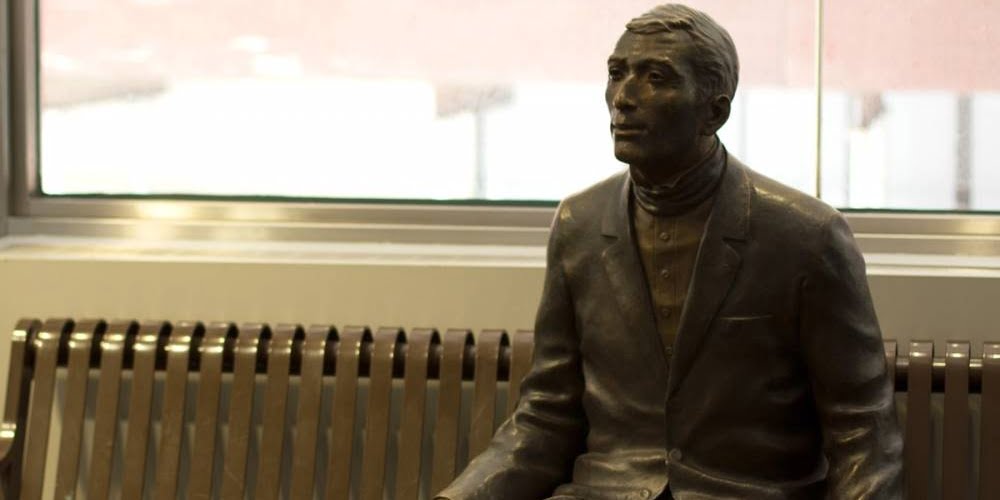