In the 700 block of Church Street, the remains of Edmund Botsford (1745-1819), early pastor of Antipedo Baptist (later First Baptist) Church, lie buried in the Old Baptist Cemtery. A marker was placed at Botsford’s grave in 2004.

In the plan of Georgetown, laid out by 1730, this one acre lot was reserved for Antipedo Baptist by Elisha Screven. A brick building built before the Revolution for the Baptists, Presbyterians, and independents housed the area Baptists who were constituted 1794. By 1804 its congregation had built “a handsome and commodious wooden meetinghouse” on this lot, commanding a view of the whole town from the front.

Old Baptist Cemetery
Among the graves here are those of William Cuttino, Sr., treasurer and builder of the Antipedo Baptist Church and John Waldo, minister and educator. Other early leaders buried here include the Rev. Edmund Botsford, native of England who became minister of this church in 1796; and Savage Smith, president of the church in 1805.

Botsford, Edmund a Baptist minister, was born at Woburn, Bedfordshire, England, in 1745. He was converted at Charleston, S. C., in 1766, and licensed to preach in February, 1771. His first congregation was about forty miles from Savannah, but he also preached in Georgia. He was ordained pastor at Charleston; March 14, 1773. Subsequently he served several churches in Virginia, and closed his earthly labors in Georgetown, S. C., Dec. 25, 1819. He published The Spiritual Allegory: — Sambo and Toney: — and A Dialogue between Two Servants. See Sprague, Annals of the Amer. Pulpit, 6 138. 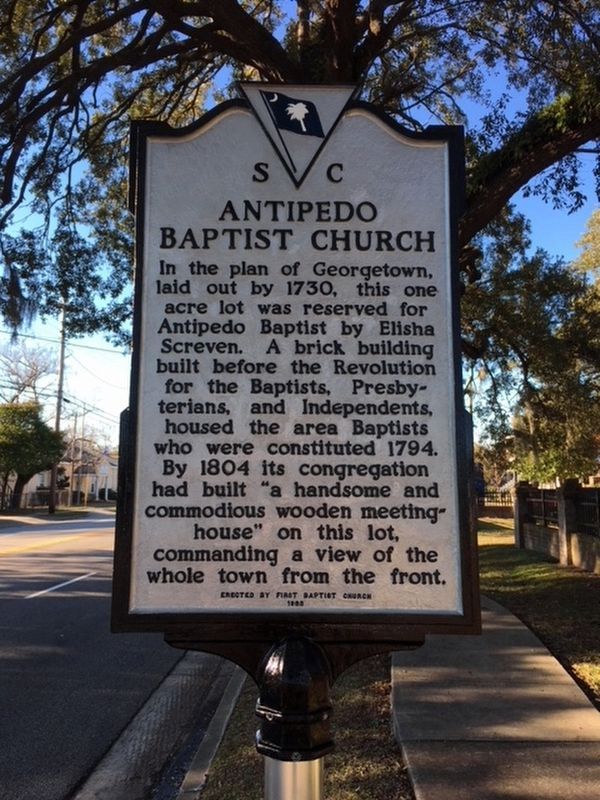 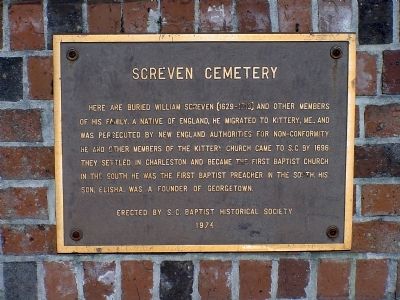 0.35 miles
No Reviews
Favorite
Founded in 1729 by William Screven’s son Elisha, Georgetown lies sixty miles north of Charleston. The Screven family cemetery is on Prince Street, near the intersection of Prince and Scriven Streets. copyrighted and used by permission from David Beale, Baptist History in England and America: Personalities, Positions, and Practices   Here are buried William Screven (1624–1713) and other members of his Read more...
View all