There is also a John Waller Highway Marker on East Scotch Cross Road. Traveling south, if you pass Pembroke Road on the left, you just missed this marker on the right:

One half mile south is the grave of John Waller, early minister of the Baptist faith in Virginia, where he is credited with founding eighteen churches. He was persecuted and imprisoned by the established church and civil authorities. In 1793, he moved to South Carolina, where he founded Bethabara and Siloam churches.

John Waller’s white marble tombstone, erected in the 1870s, replaced the original, which had been made of limestone. The inscription reads:

The Waller home was likely near the gravesite, which is on private property. Permission is required to visit this gravesite.

Known in his young manhood and before his conversion as “Swearing Jack,” the Reverend John Waller is regarded today as an historic figure in the fight for religious freedom in this country.

He refused to abide by the Virginia statute which forbade preaching in the colony by anyone except ministers of the Established Church, the Church of England.

He spent 187 days in Virginia jails at various times after preaching the gospel as he believed it. He was scourged while in prison, and, on one occasion, struck across the back of his right hand with a sword wielded by a guard. 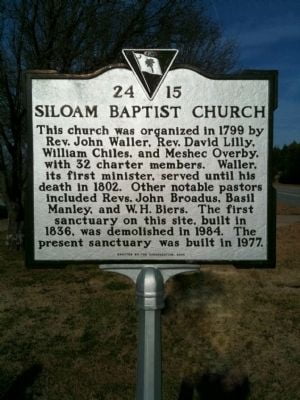